When it comes to VR games, the one everyone talks about is Beat Saber. The pick up and play nature of Beat Saber combined with its incredibly high skill ceiling make it appealing to just about everyone, even those who aren’t necessarily into virtual reality. There have been other VR rhythm games that have come out that have tried to do their own thing (BoxVR comes to mind) and compete with Beat Saber, but none have really stood out as much as Beat Saber has. That is, until now. Synth Riders brings a lot of really interesting ideas to the table, including an unmatched sense of speed and intensity, that allows it to stand shoulder to shoulder with the best VR has to offer.

On the surface, Synth Riders looks pretty similar to that other VR game with the music and the swords. Yes, you hit colored notes that are synced to the music, but that’s about the only similarity Synth Riders really has in common with Beat Saber. Synth Riders features “hold notes,” which require you to keep one of your hands aligned with a trail that can move all over the place. These may seem like a small touch at first, but when you’re trying to keep your left hand centered on a line while frantically hitting targets with your right, you’ll realize that this is a pretty different experience. When combined with other special targets that you need to hit with both hands and obstacles that you have to physically dodge, all of Synth Riders‘ mechanics create an incredibly involved and active experience that makes you practically dance in place. 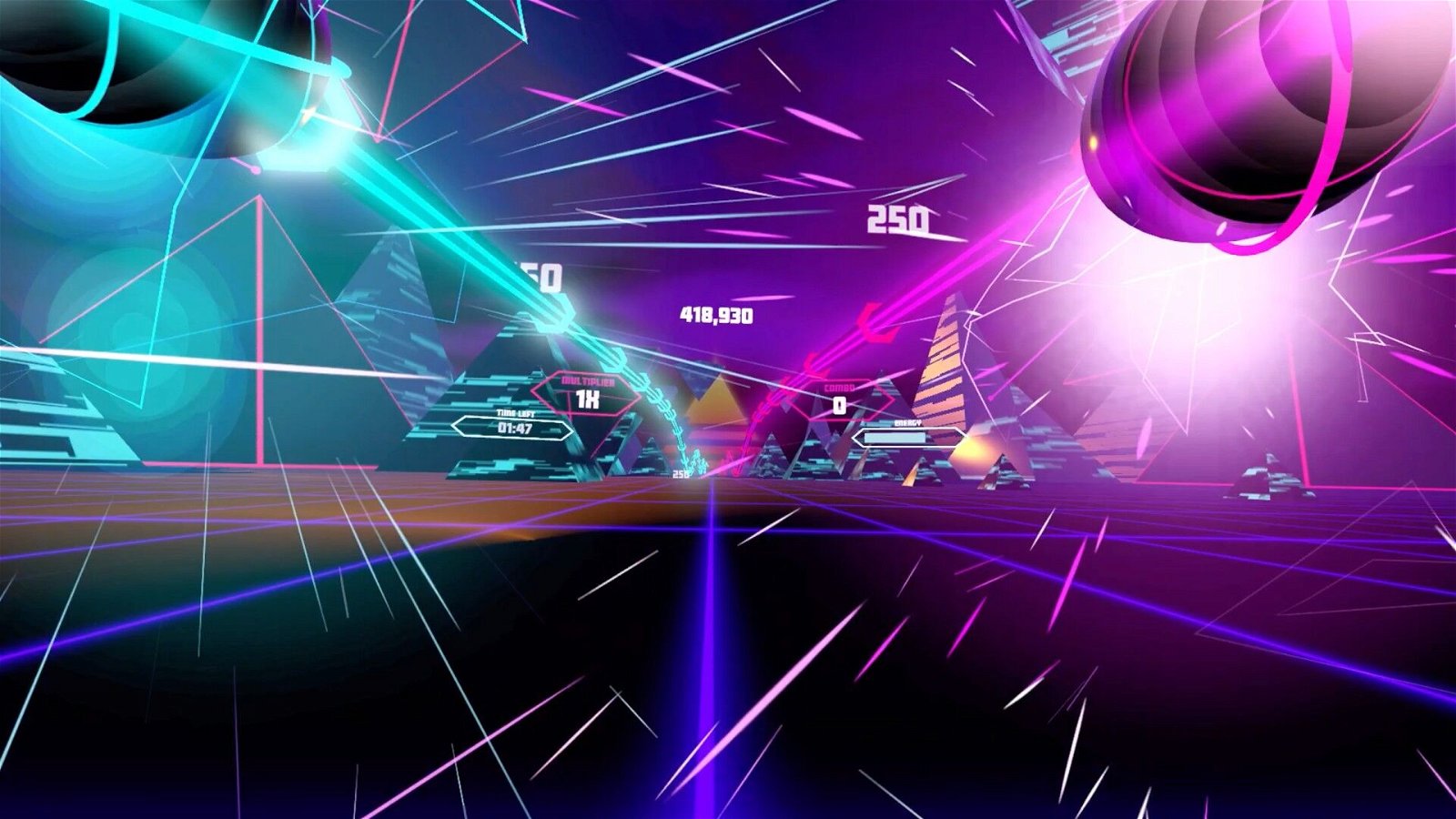 The thing that immediately stands out after starting Synth Riders is the sense of speed. Rather than standing in place and having the notes come to you, you’re essentially standing on a moving platform that propels you through the environment toward the notes. When you add all the neon colors and particle effects into the mix, everything feels much more frantic than a Beat Saber session ever could. The songs are expertly mapped, too, and they all flow incredibly well. Also, the environments are visual spectacles, and blasting toward a giant low-poly face wearing a VR headset while jamming out to 80’s songs really nails the vibe Synth Riders sets out to create. The game truly does have a unique identity, and the 80’s vibes perforate every aspect of Synth Riders from the tracklist to the menus.

When it comes to difficulty, Synth Riders is no joke. On easy, things are chill and hitting every note won’t be an issue. When you bump things up, however, you’ll be flailing your arms about just trying not to fail. Rhythm fans will appreciate the high skill ceiling and learning curve, and there are a ton of songs to practice and master. The full tracklist comes in at about 30 songs, which is much more than Beat Saber had when it left early access. There’s a whole lot of content here, and it’ll keep you busy for a while.

Unfortunately, some of the songs are a tad long, and because there are so many of them in the same genre, the game can begin to drag a bit as a result. It’s still just a minor complaint, but longer sessions can start to get a bit repetitive. Thankfully, outside of the standard mode, there are also fitness-oriented gameplay modes like boxing and force mode that require you to do more than just have your hands in the right place. Synth Riders can be a pretty intense workout if you want it to be. 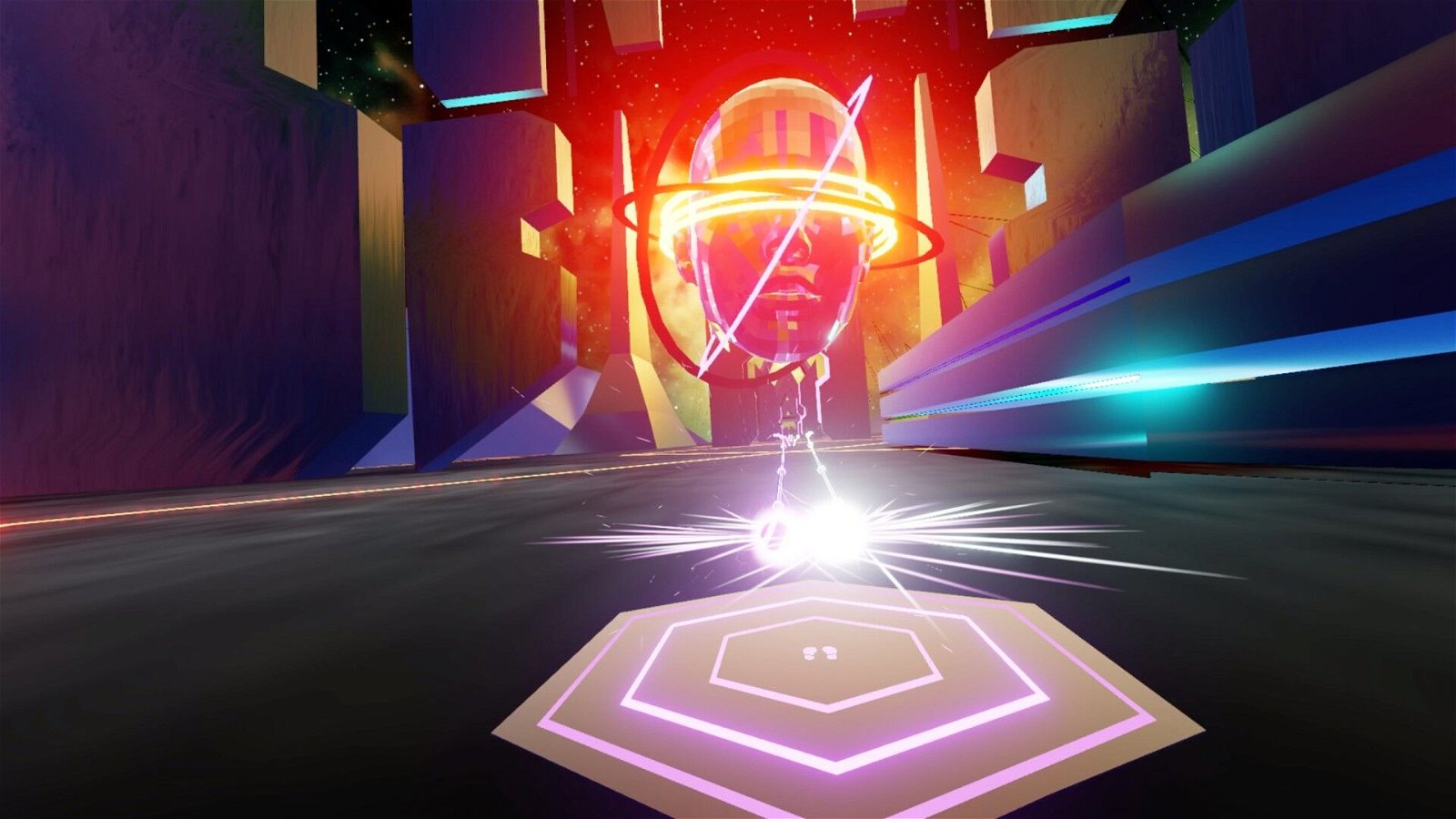 Synth Riders is also extremely customizable. At first, I was thrown off because the hand colors are the reverse of how they are in Beat Saber, but in the options menu you can set the colors to whatever you want, which is a nice touch. Every part of the UI can be adjusted, the sound it makes when you hit notes can be changed, particle effect intensity can be modified, just about every part of the game can be customized to your liking.

Speaking of custom content, the Quest version of Synth Riders also supposedly supports the official beatmap editor and custom songs, but I couldn’t find any way to access any custom songs during my play time. The PCVR version of the game has access to tons of maps because the game has been available in early access for a while, so maybe the Quest version has its own pool of songs that hasn’t been populated yet because the game isn’t officially out. 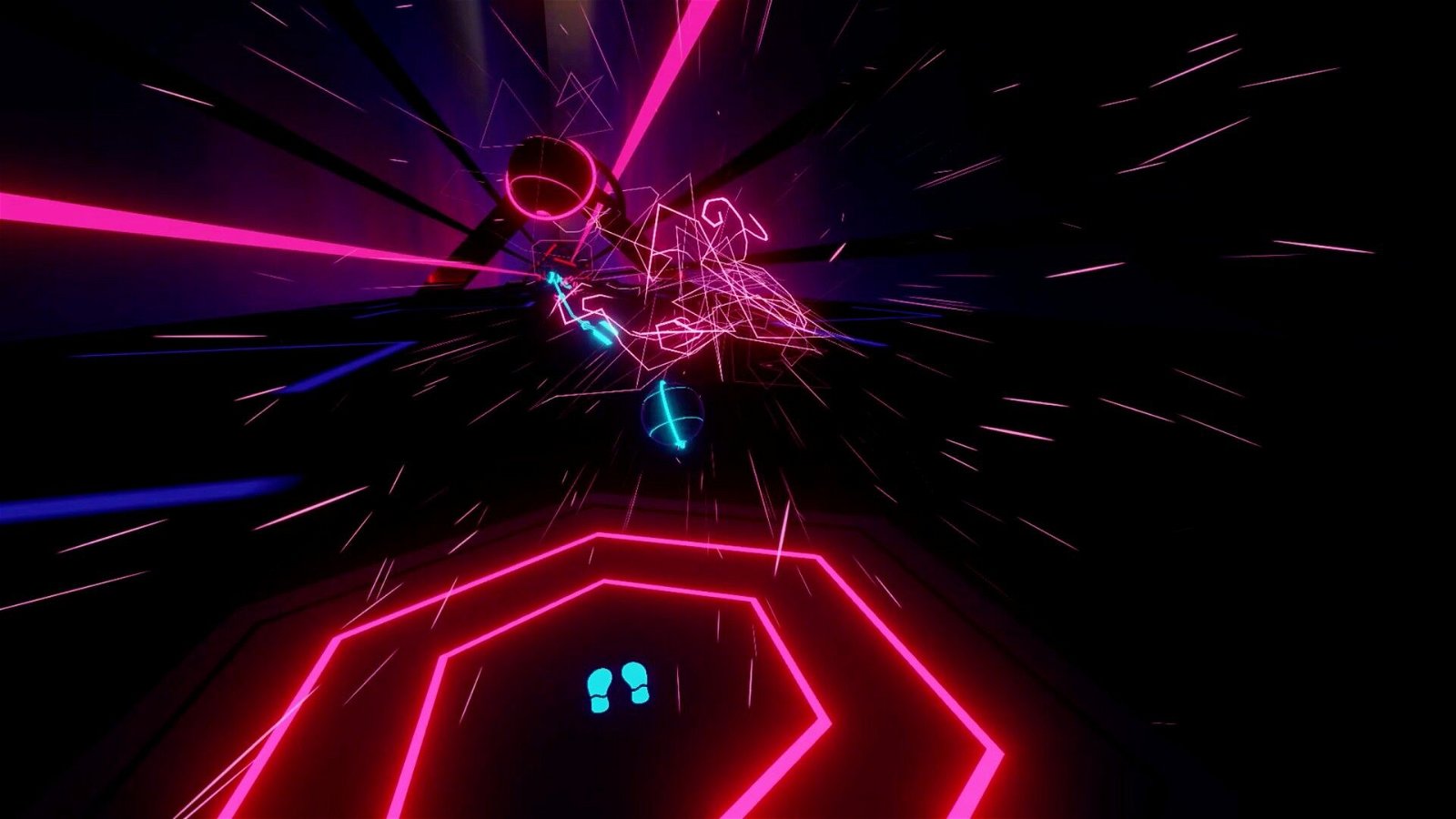 Synth Riders is just as much an audiovisual experience as it is a rhythm game. Unlike other VR rhythm titles, you’ll feel the music course through you in Synth Riders. The aesthetics, the soundtrack, and the gameplay all blend together to create a truly unique experience, and you get a huge amount of content for a relatively low price, especially on Quest. Not only that, but even more content, like multiplayer, is on the way very soon. This is a VR game you shouldn’t miss, especially if you’re the type that keeps returning to Beat Saber. The VR rhythm king may have finally met its match.

Review Disclosure Statement: Synth Riders was provided to us by Kluge Interactive for review purposes. For more information on how we review video games and other media/technology, please go review our Review Guideline/Scoring Policy for more info.

Put simply, Synth Riders stands proudly among the best rhythm games VR has to offer. It takes the formula that so many have emulated and innovates upon it in meaningful ways. A rocking soundtrack, wealth of content, and appealing aesthetics make Synth Riders an incredibly easy game to recommend, even for those that aren’t typically into rhythm games.