Kaguya-sama Love is War Series Review: All is Fair 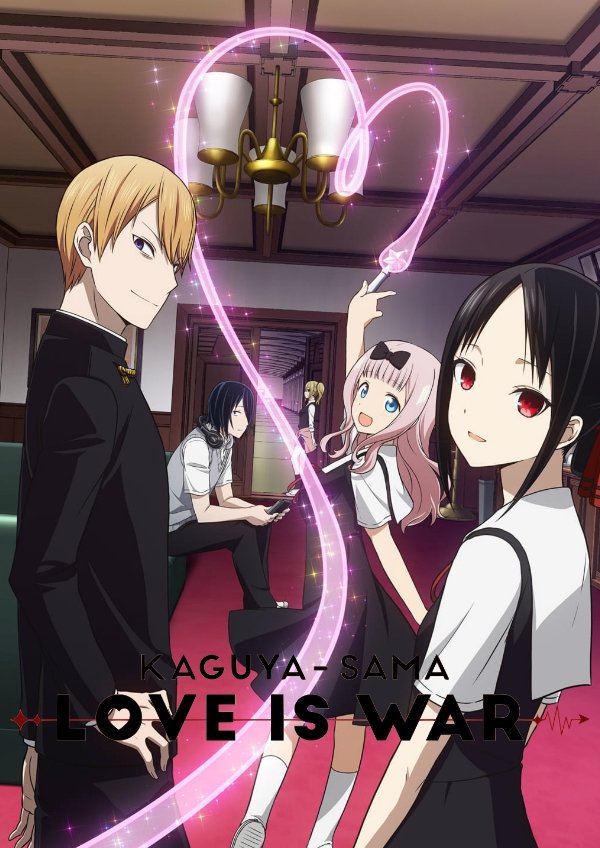 ***Warning, the following may contain spoilers for Kaguya-sama: Love is War. Reader discretion is advised.***

Shuchiin Academy has a centuries-rich educational history. Through its many years, the institution has crafted Japan’s next great leaders. Currently, at the very top of this upper echelon are student council president Miyuki Shirogane and vice-president Kaguya Shinomiya (voiced respectively by Makoto Furukawa and Aoi Koga).

These two are the epitome of grace, class, and excellence. When together, nothing can hope to shine brighter than Miyuki and Kaguya. Their radiance is so overwhelming, most believe – and many already assume – they make for the perfect couple.

What everyone fails to realize is that both Miyuki and Kaguya are indeed interested in each other, but their pride will not allow them to express their feelings first. Therefore, these two often find themselves in an intense battle of logic and brains to get the other to say, “I love you.”

However, Miyuki is the unmovable object to Kaguya’s unstoppable force. As a result, the frightening nature of their war threatens to swallow up all foolish enough to get in their way. 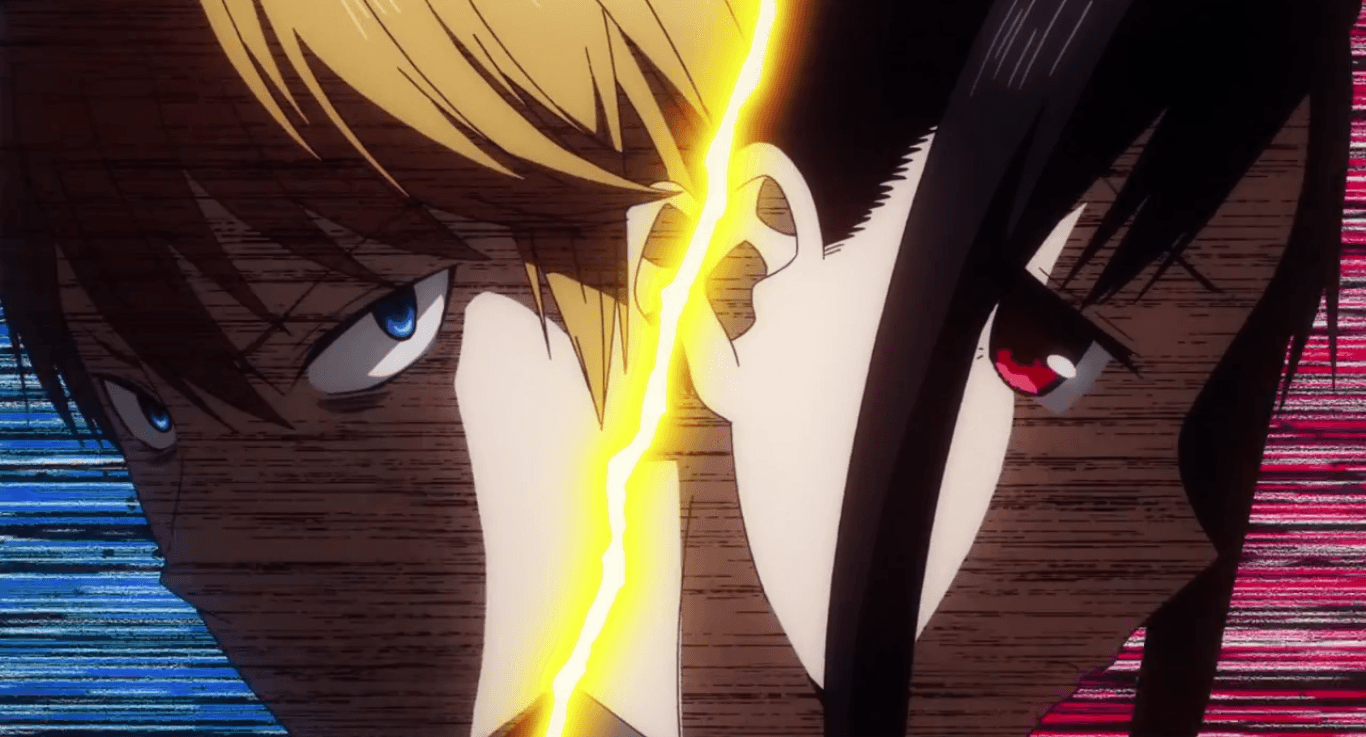 Kaguya-sama: Love is War (Kaguya-sama) ended up being a ton of fun. This was easily one of the best romantic-comedy series I have seen in a while. Without question, this show had an amazing sense of humor.

Adding to that, Kaguya-sama was rather sneaky with implementing its brand of comedy.

To give you an idea, the series started relatively average: 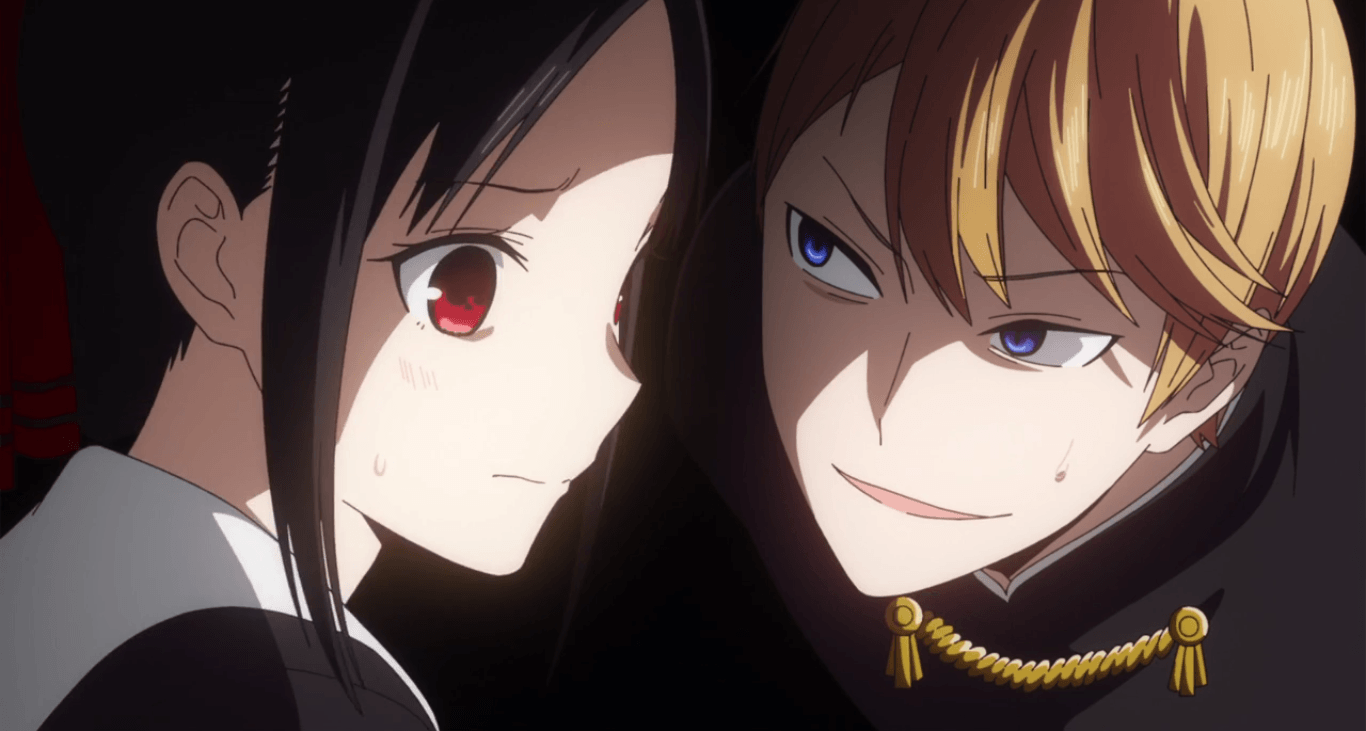 The set up didn’t feel all that foreign. Thus, I was expecting a show that was going to be more run-of-the-mill. Then there was an off-handed, but nevertheless amusing one-liner. Then a clever retort. And then there was a hilarious over-the-top reaction. Before I knew it, Kaguya-sama had me thoroughly hooked.

If nothing else, this series had the sort of personality that allowed it to break away from its more subdued surface qualities. Leading the charge in this area were Kaguya-sama’s two main characters – Miyuki Shirogane and the titular Kaguya Shinomiya.

The president and vice-president made for a great couple, and the ultra-combative dynamic that was between them became absurdly entertaining. 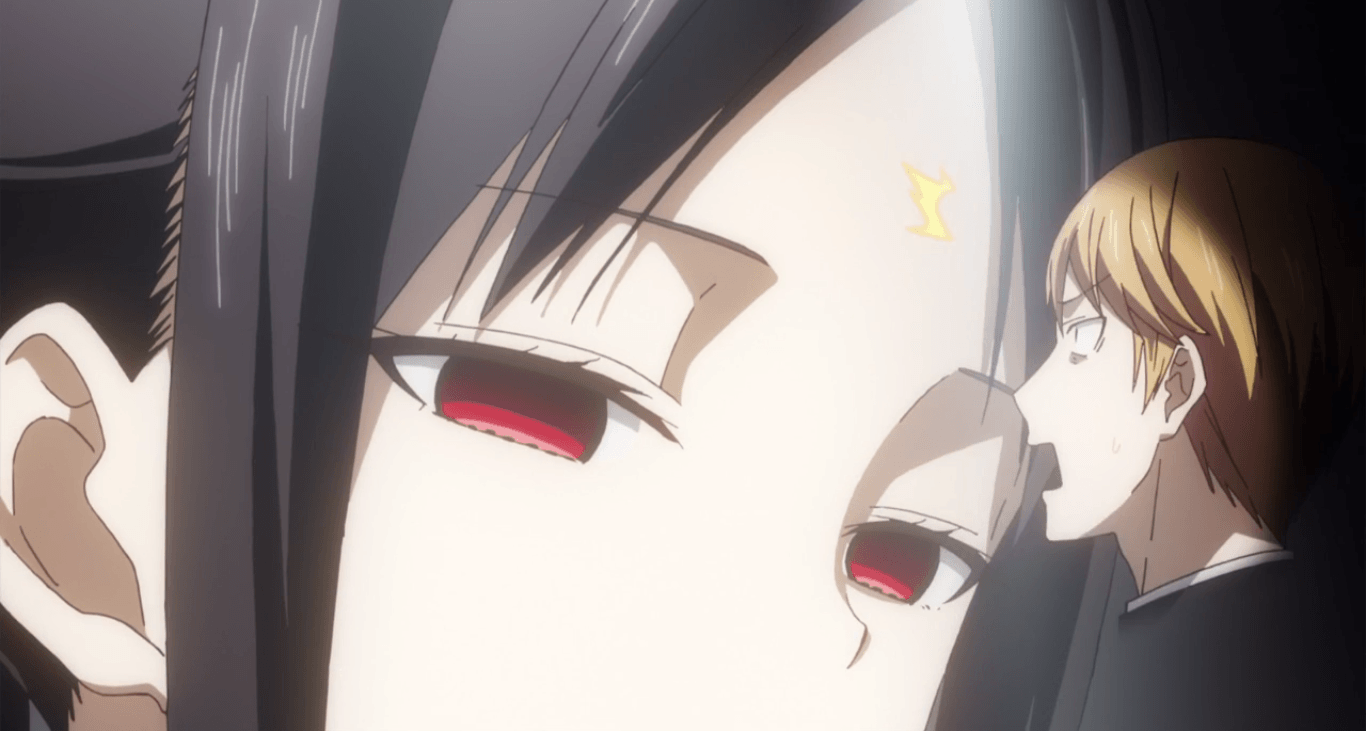 First off, both Miyuki and Kaguya were highly intelligent. More importantly, though, one was not smarter than the other. They were an equal match in terms of wit. Still, that isn’t to say they didn’t have their unique advantages. Miyuki was much better at thinking on his feet were as Kaguya was nearly superhuman with her levels of preparation.

As a result of their top-tier brilliance, neither Miyuki nor Kaguya was ever able to win one of their psychological battles through pure logic alone. This show was very good at keeping everything fair to ensure neither had a runaway victory count. Therefore, these two had to go at it with their full reasoning capabilities, and that always got really funny really fast. Plus, since they were both abnormally smart, things never got too out of hand. Everything remained believable within the confines of this particular series.

If we ignore all that, we would still be left with one of this show’s brightest gems. Miyuki and Kaguya were at their strongest whenever they were internally freaking out because they were crushing on each other hard. As everything progressed, it became clearer and clearer how much the two liked one another. Therefore, the absurdity that was their rivalry only grew. Luckily, this was the sort of absurdity that just added to the overall charm of Kaguya-sama. 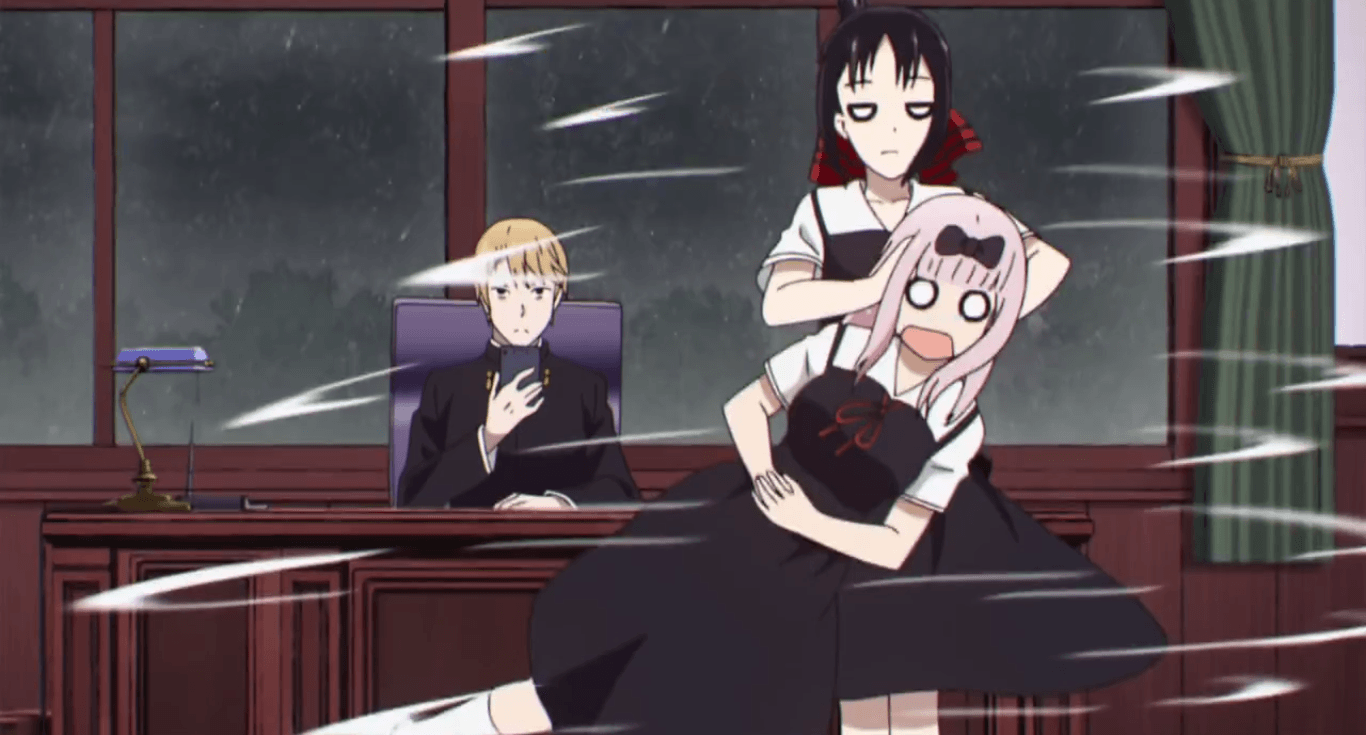 However, this series would have likely lost its fun-factor if it was just chess battle after chess battle. I think Kaguya-sama knew that too because it always made sure to throw in a curveball that completely shattered Miyuki and Kaguya’s trains of thought. Any bit of uncalculated chaos threw these two into a spiral of confusion, desperation, and panic, and it was a fantastic sight to see.

That was why neither Miyuki nor Kaguya was the out-and-out best thing about this show. Don’t get me wrong; their relationship was the foundational pillar that allowed everything to be what it was. Be that as it may, I would never forgive myself if I didn’t mention Chika Fujiwara (voiced by Konomi Kohara) for she was – low key – the greatest element this series could have added. With a single mindless word, Chika could undo every scheme, ploy, and expectation either Miyuki or Kaguya had in their favor.

In short, you could never guess what Chika was going to do, and it was phenomenal.

Kaguya-sama was a series full of surprises, and that more than anything was what made it special. 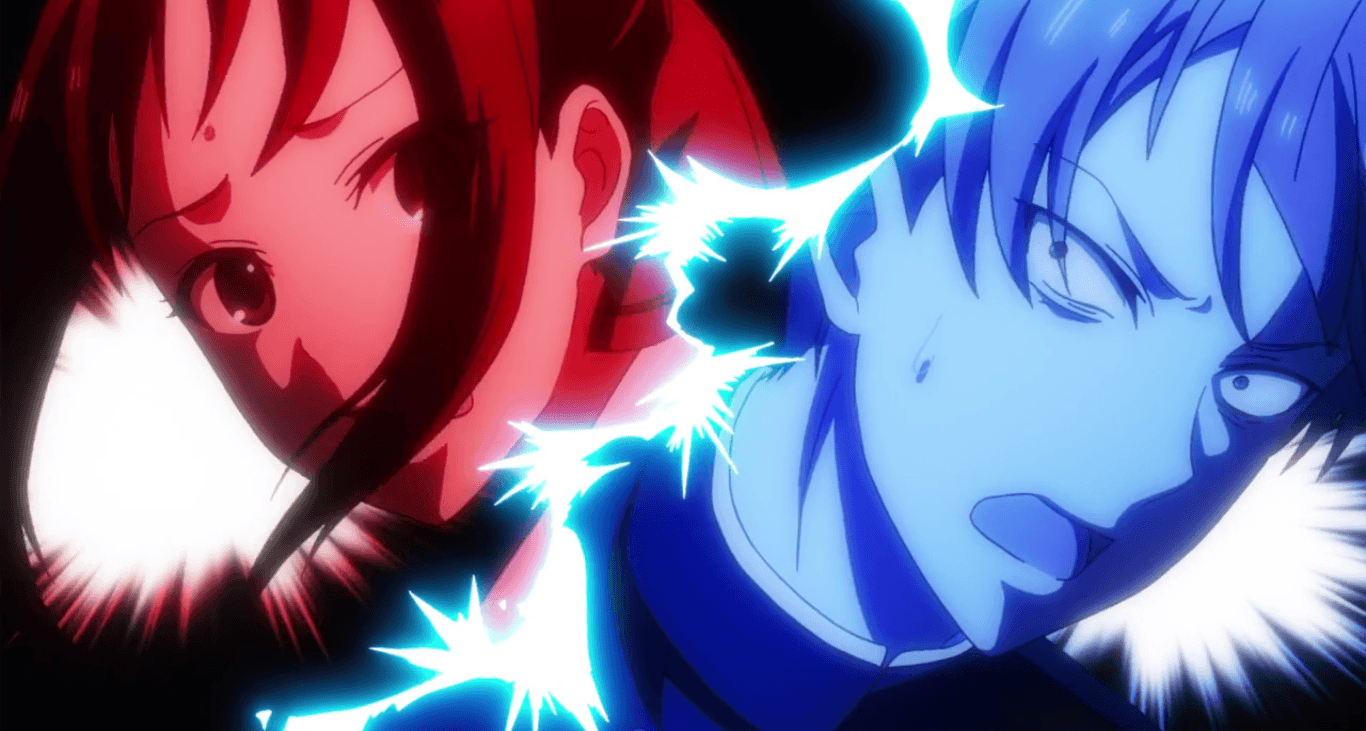 For full transparency, I am starting this section off with something which is a massive pet peeve of mine. This is a storytelling tool I have rarely seen done in a way I didn’t find annoying and utterly useless. I do not like narrators, and Kaguya-sama did not change my thoughts on the matter.

The characters, the visuals, the situations, these are the elements that can tell you everything you need to know, and for comedies, they are what deliver the jokes. I make such a statement with confidence because Kaguya-sama did precisely that. This series’ narrator served no real function other than to turns scenes and scenarios more awkward than they needed to be. Nothing cringy, mind you, but when a show usually lands its humor, it’s all the more obvious when it falls flat on its face. 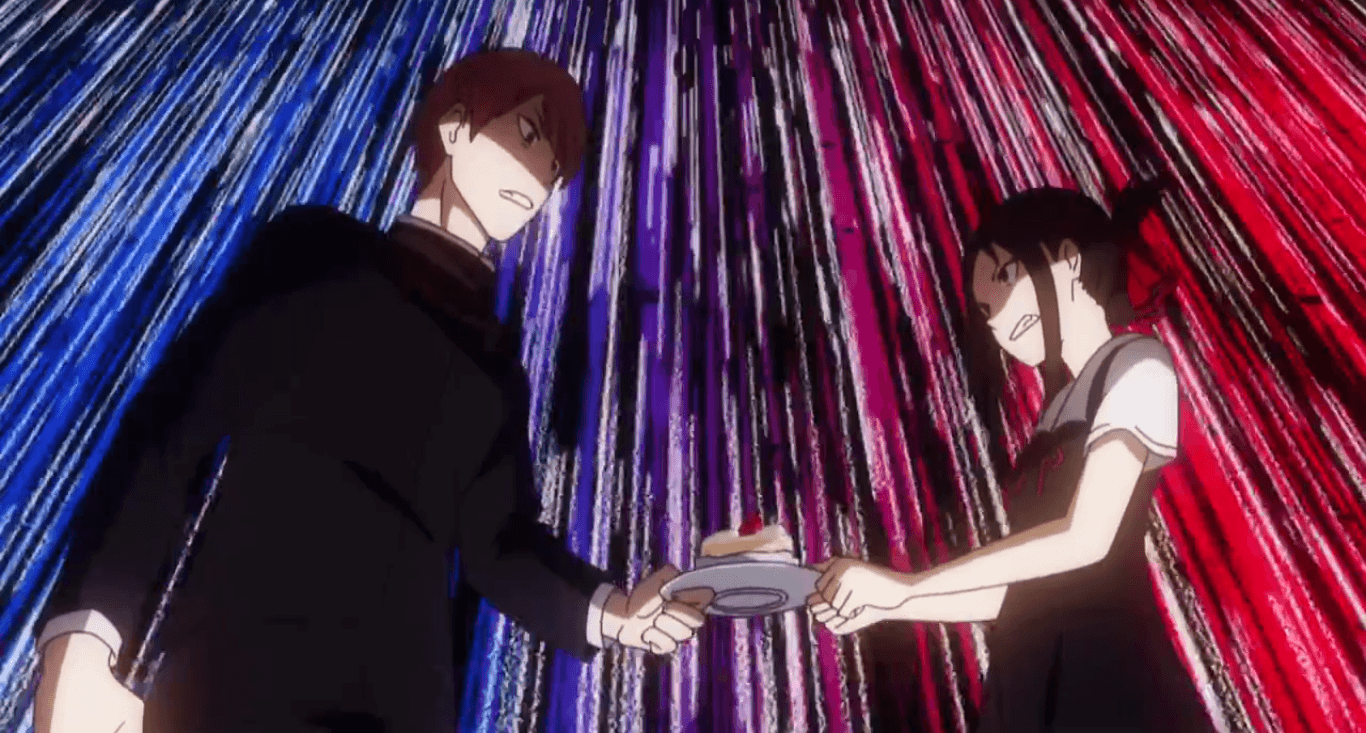 Now, for the sake of fairness, did having a narrator take away from Kaguya-sama’s fun? No, not in the slightest. This was mainly something that bothered me, and accordingly, I admit my bias towards this topic.

On another note, I will mention Kaguya-sama’s final episode was its weakest segment by a significant margin. Going back to what I said about this show’s been-there-done-that set-up, this ending was quite bland. Rising from such a place is one thing, but to then dive back down from a height build by clever writing, entertaining interactions, and cute as hell puppy-love protagonists, it’s hard not to feel slightly dissatisfied when said finale comes.

Before anything gets misinterpreted, I am NOT saying Kaguya-sama was unsatisfactory; far from it. This series was fantastic, and while this might just be me justifying things in my head, I like to think the ending left the door open for a second season. And that, I assure you, is something that would make me exceedingly happy. 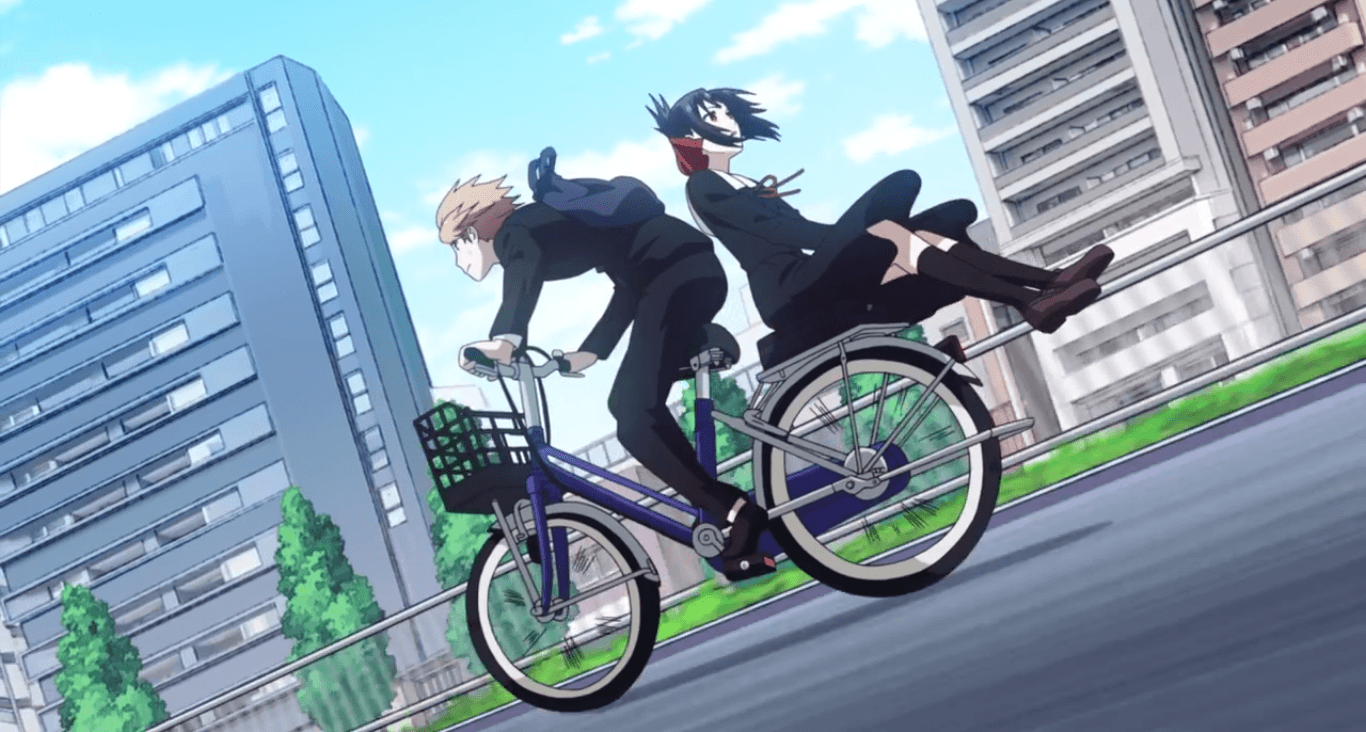 This series was a genuine treat.

The characters were hilarious and played off each other well. The comedy was solid, and it struck home more often than not. Hell, despite being a romantic-comedy, this series still managed to have a few epic looking scenes.

While parts like the ending weren’t as up to par as the rest, you need to remember that the rest was flying pretty damn high.

Kaguya-sama: Love is War is an easy recommendation.

But these are just my thoughts. What are yours? Have you seen this show? What would be your advice concerning Kaguya-sama: Love is War? Leave a comment down below because I would love to hear what you have to say.