Fire Emblem is a very fun franchise, and one that deserves its recently obtained “AAA” status in the Nintendo library of series. We are very much looking forward to Fire Emblem Three Houses, and are hoping to hear more about it very soon. In the meantime, we play Fire Emblem Heroes, and we really do enjoy it. It gets repetitive, sure, but it helps pass the time until the next main game arrives. But despite a nice long history…a very disturbing trend has emerged in the last six months or so.

To get new Heroes in the game, you have to “Summon” them via Orbs that you can get through various means. Who you summon is somewhat dependent on “Banners”, which highlight a few Heroes and give you a chance at 2-4 “special” Heroes. This is a great way to help expand the roster of characters and give people insights into the other Fire Emblem games. But, Fire Emblem Heroes seems bent on delivering more “Fan Service” banners than ones with new characters. And two of the members of the Nintendo Entertainment Podcast aren’t happy about it.

Todd’s Take – More To Life Than Just Camilla and Tharja

I’ve stated multiple times that I love Fire Emblem, and I do really enjoy playing Fire Emblem Heroes, but when they announced the recent “Hot Springs” banner, I about flipped my lid. I’ve endured a lot of rather “weird” banners in the past, but some of them somewhat made sense. Like the holiday banners, those make sense to an extent. But a hot springs banner? REALLY?!?!?

Now, I’m sure diehard Fates fans are saying, “Todd, you clearly don’t play Fire Emblem! Because the Hot Springs were a part of My Castle in Fates!” Well, you would be wrong, not only did I play Fates, I bought the rare Special Edition and beat all three titles. And yes, I know that the Hot Springs were a part of the game, that’s not the point. The point is why are they HERE in Fire Emblem Heroes? Do I really need a Hinoka and Sakura in battle with hot springs attire? I don’t think so. It’s rather insulting in my opinion because Hinoka is a hardened warrior and Sakura is very shy, there’s NO WAY they would be in battle without their gear.

Oh, but it gets better, as many have noted (and I made sure to get a picture of for the feature image), Camilla is going to be in this banner as well. Yes, Camilla, the literal “eye candy” of Fire Emblem since her birth in Fates. She has been one of Heroes most used characters, mainly because they seem bent on putting her in skimpier and more revealing outfits whenever they can.

We get it! People like Camilla, but to have her in so many of these “special” banners? It screams of Nintendo making her just so people pay to get Orbs to try and summon her. And Tharja was the same way to a lesser extent. Her Christmas Banner outfit is anything but, and they made her a bride for one banner…because of course they did.

Very recently (in fact the banner before the “Hostile Springs” ones were announced), we FINALLY Laguz into the game. These have been some of the most requested additions to the game, and yet, it took us nearly two YEARS to get them in. They don’t play that much different than other units, so why did it take so long? Because of the “special banners”, that’s why. 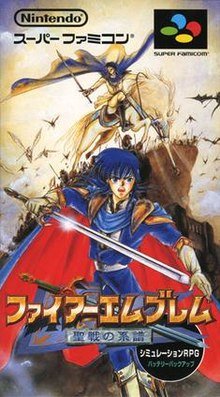 And let’s not forget about the games that only released in Japan. Heroes has done a decent job at bringing some of the characters from Geneology of the Holy War, Thracia 776, and certain others to bear, but not all! What about Mystery of the Emblem, there were new characters in that! And I would like more from Holy War and Thracia 776. This is FIRE EMBLEM, there are so many characters that can be brought into the game…and yet…they’re not. Or at the very least, not as frequently as they used to be.

The game is making money on its own without all the “fan service” banners. Focus on what Fire Emblem is, a diverse collection of UNIQUE characters. Not a single character in 7 different outfits.

I recently wrote a sort of “catch all” article about the problem Fire Emblem Heroes faces, but didn’t get to really dive into the meat of the seasonal banners problem. 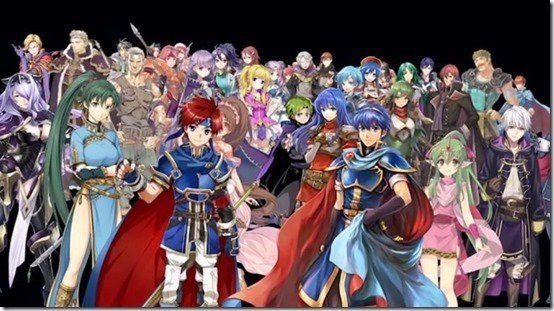 When Fire Emblem Heroes was unveiled back in 2017, its premise was a dream for fans of the series. Characters from across the Fire Emblem universe, those from the early 90s all the way through to the present day, were being brought together for the first time. Heroes allowed players to create team ups never thought possible. Roy (FE6) could finally fight along side his father Eliwood (FE7), with the legendary mage Linde (FE1) and overlooked archer Takumi (FE14) rounding out their platoon. Chrom (FE13) could fight beside Marth (FE1), and Cordelia (FE13) with Caeda (FE1). Fire Emblem Heroes was the bridge that brought the series’s 25+ year history together.

That was the reason so many Fire Emblem fans wanted to play this game – and why it was so successful immediately at launch. Heroes served as a great way to introduce new players to the franchise’s lore, while providing the ultimate fan service to its veterans.

Somewhere along the way, Heroes’s goals changed. It’s impossible to say why, but my bet is on money. Fire Emblem Heroes blew Nintendo’s expectations away, pulling in 10s of millions of dollars each month thanks to seasonal banners that put familiar faces into themed outfits. 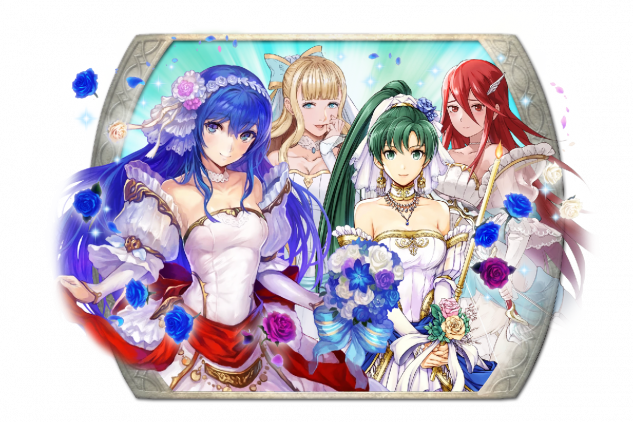 I don’t think seasonal banners themselves are the issue per se, I think they have a home in Heroes. The first seasonal banner, for example, brought characters from two different games together to celebrate the start of spring. Seeing the serious Prince Xander dressed in a rabbit outfit felt off for the character, but it was harmless fun that got me excited for the change of seasons. June’s bridal banner was the second seasonal event. Caeda (Shadow Dragon), Lyn (Blazing Sword), Cordelia (Awakening), and Charlotte (Fates) wore wedding dresses to celebrate marriage. This banner worked on every level – all four characters had dramatically different views on love and romance which drove their characters in the source material. Those first banners represented the franchise well, showing a different side of what Fire Emblem can be.

It was June’s second seasonal banner that marked the beginning of the end – a banner focused entirely on Awakening characters. The summer banner featured Robin, Tiki, Gaius, and Frederick in beach attire, with the ladies dressed in outfits that were totally out of character. The developers threw the source material aside in order to capitalize on the market that couldn’t resist spending money to get a copy of the tactician Robin dressed like this: 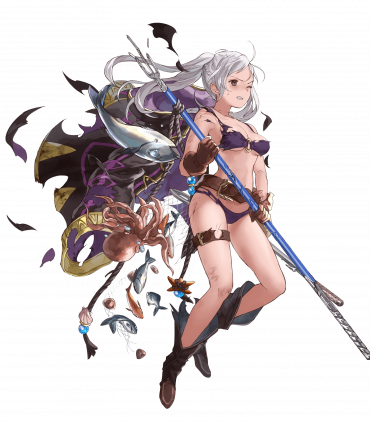 History lesson over. Let’s talk about the two major issues facing seasonal banners in Heroes: The way characters are dressed and what games those characters come from. 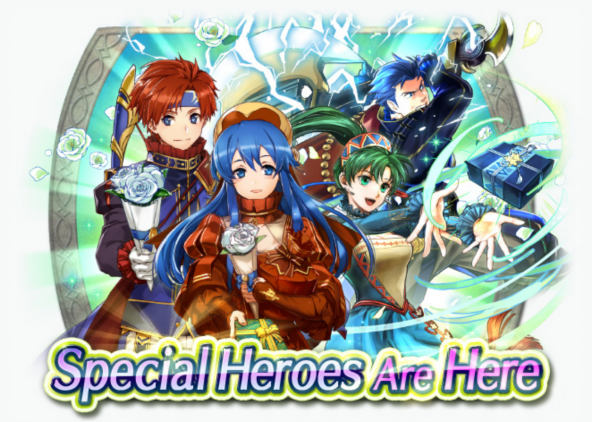 The best seasonal banners treat their characters with respect. Last year’s Valentines Day banner stands out as fan service done right. Roy, Lilina, Hector and Lyn were the featured units, each dressed in ornate attire befitting nobles. Their art was stunning and vibrant, and it was easy to see those four dressed that way. The sight of Hector wielding his legendary axe Armads while the ladies used magical gifts to attack fit the character and added a nice mix of humor into the situation.

Compare that to Spring Kagero just one month later. The sequel to 2017’s spring banner again featured a busty lady from Fates. Unlike Camilla, Kagero’s assets were never a major part of her character. A few characters call her beautiful in marriage conversations, but the serious ninja would never wear an outfit like that. It just isn’t who she was. 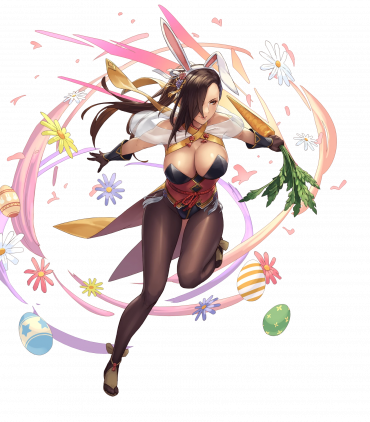 I understand that makes me sound like a crotchety old man to some, but I believe that these fan service banners should do more than just give us ladies dressed in revealing attire. Honestly, I’m surprised Fire Emblem fans who play for the romance elements found in Awakening and Fates aren’t more offended by Intelligent System’s strategy here. The developers are clearly looking to profit off of them at the expense of the original work’s artistic integrity.

The second major issue goes beyond seasonal banners but is emphasized in them – Heroes’ character selection has been horrible on these recent banners. Until the Christmas banner, which featured Eirika and Ephraim from Sacred Stones, we only had one seasonal banner that didn’t feature a character from Fates or Awakening.

Fates and Awakening are the two most popular Fire Emblem games of all-time, there’s no debating it. But Intelligent Systems betrays lifelong fans by constantly highlighting characters from those two titles rather than those from games past. Worse, they always use the same characters from those games! We have a total of six Camillas, six Corrins, five Lucinas, five Azuras, four Chroms, four Xanders, Four Ryomas… and some of those characters haven’t been Legendary Heroes yet (you know they will be). Popular characters are going to get theirs, but the number of main character reskins is staggering. Worse, it’s making the game bland and unexciting. 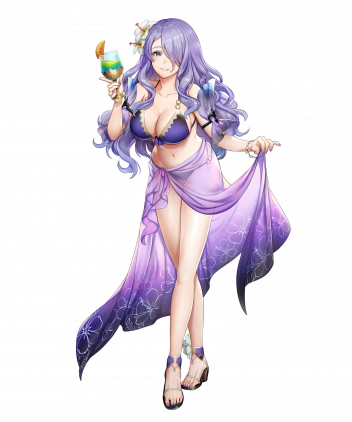 I do recognize that some of the older characters have been over-represented as well. We have five Lyns, four Hectors, four Eirikas, and four Ephraims. I’m not excusing that. Intelligent Systems doesn’t want to take chances with less popular characters on seasonal banners, and I think that’s a real shame.

Intelligent Systems is wrong in thinking this is what fans want. They’re looking at their bottom line at the end of the day, but I would advise them to have faith in their older characters. Look at Reinhardt and Olwen for proof. I had no idea who they were before Heroes, along with millions of others. But those two became icons in the series, with Reinhardt currently ranking 8th in the annual Choose Your Legends poll. Players will pay for characters with great art, big personalities, and intriguing back stories.

Fire Emblem Heroes originally served as a bridge for a franchise divided between old and new. Through seasonal banners that don’t consider character, it burned that bridge down and became a lazy cash grab. It’s hard to see the appeal for Fire Emblem fans. If you’re just in it for the art, maybe the new Fire Emblem Heroes is for you. Unfortunately, those of us who value the franchise for its stories and gameplay will find nothing of value here.

So what say you Fire Emblem Heroes fans? Is the game now just a cash-grab? Or do you still think there’s hope for it? Let us know in the comments below!