With the rise of home gaming consoles, the arcade scene has been in steady decay. And while this hasn’t had a big impact on games such as fighting games, other game genres haven’t escaped unscathed. One of those genres is the beat em up or 2D brawler. Names such as Fight Final were arcade headliners during their day but has since been neglected by Capcom. Another ill-fated series that reined on the home consoles, Streets of Rage/Bare Knuckles, had endured some time in the sunlight but hasn’t been seen since the third outing. It looked like a once favorite genre was pretty much dead – that is until a one-man shop decided he didn’t agree with that.

That person is Sebastián García, the sole developer of an Indie smash hit called Fight’N Rage. Released back in September 2017 on Steam, this title has captivated both old-school and current generation games with a type of game that was pretty much dead. It’s still hard to believe that we’ve received a 2D brawler game in 2017, and a damned good one at that. As such we reached out to Sebastián García to find out why he did it and we were fortunate to be granted an interview with him.

An Interview with SebaGames Dev

Keith Mitchell: What was your motivation for putting out a beat em’ title?
Sebastián: I love to play classic fighting games and I enjoy beat’em ups too. I simply wanted to mix the best features of each genre in a single game.

Keith Mitchell:  There are bits and pieces from a huge selection of old-school titles in Fight’N Rage. Are there any specific titles that carried more weight than others.
Sebastián: In terms of gameplay, the Capcom classic beat’em ups are my main source of inspiration. Games like Final Fight, Cadillacs and Dinosaurs and Alien vs Predator. I also took elements from Streets of Rage 2 … mainly related to enemy’s behavior, because I think that SoR2 is one of the best games ever made especially in this aspect. Aesthetically it’s mainly inspired by Mighty Final Fight, while it takes some things from the Teenage Mutant Ninja Turtles 3 NES game too. 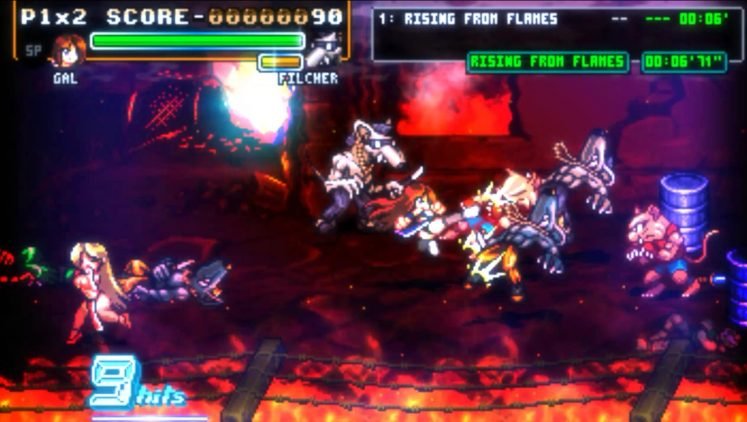 Keith Mitchell: There have been discussions regarding the art style of the game. Some love it, while others aren’t fans of it. What was your decision for the style you picked?
Sebastián: Well, I supposed that you are talking about the technique (instead of the art-style), I mean, the pixel-art is a technique, not a style… However, I know some people simply don’t like pixel-art graphics nowadays, so, it doesn’t matter, you cannot expect that every people like it. I’m not worried about this, as most enjoy the style that I’ve employed. As for why I decided to do this way – it’s simply because I like it.

Keith Mitchell: We have to ask since we’ve seen the complaints – why were the females in the game designed the way they are? Why are they so “top-heavy”?
Sebastián: It’s mainly because I like it. Plus I think that looks pretty cute on chibi-styled characters.

Keith Mitchell: Are there any plans for porting Fight’N Rage to the consoles? Or will this stay as a PC-only title?
Sebastián: I hope I can do it in the future. If I can, I will do it for sure.

Keith Mitchell: How has the reception been since the game has been released? Are you satisfied with the results?
Sebastián: The reviews on Steam are truly amazing. I’ve seen a lot of people talking about the game and how much they’ve enjoyed it. I’d have some reach out to me to express their excitement with the game, and that’s really cool. Someone even managed to build a custom arcade cabinet and took it to Retro Barcelona. That’s like a dream come true (I always dreamed about a Fight’N Rage arcade cabinet). I love to check news about my game every day, I feel glad when I see how people discover things, new combos, or learn how to play with a specific character, I love to see that, it’s pretty exciting. 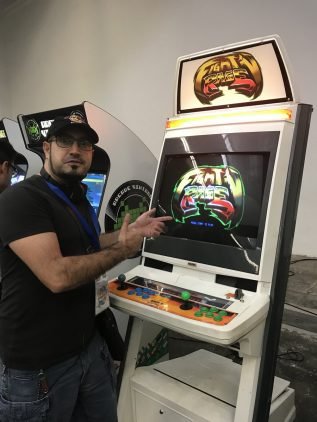 Keith Mitchell: As a one-man shop, how hard was it to get the game off the ground? How long was this title in development and what hurdles did you have to get past during the development time?
Sebastián: Well, Steam is a great platform, it makes all the “shopping issues” very easy for the developer. Related to the game itself, it took me three and a half years to develop. If I were to tell all the hurdles in the development process, I wouldn’t stop writing. While I’ve been making games for the last 20 years, this is my first big game, and it was a completely different thing compared to my other projects. It was hard but was challenging and an enjoyable task.

Keith Mitchell: Can we expect some extra content or a follow-up to Fight’N Rage?
Sebastián: I have plans to work in the game a little more… so, will see what happens!

Thank you for giving a chance to interview you,  Sebastián. It was a lot of fun and I’m still enjoying the game. Since you stated we could see more content for Fight’N Rage, I’ll definitely be watching for it.  For everyone else, if you’re on the fence on giving Fight’N Rage a go, be sure to check out our review of the title here.