After losing all of their favorite weapons in the last adventure, they are forced to rob the stores in order to continue their quest.  To minimize suspicion from mall security, they have to commit the heist all at once and run away before time runs out.

At the start of the game, players are given specific actions to perform in which no other players have access.  They can control any of the heroes at any time, but their actions are limited.  Moreover, communication is restricted to a “Pay Attention!” token.

Players have to rely on each other in order to explore the mall, use escalators, or access special spaces.  In this game, there are no “turns” – all game play is simultaneous and players should act whenever they notice that one of their actions may be useful.

There is an hourglass timer of 3 minutes to start, but it can extended if players are able to reach hourglass spaces in time.  If the timer ever completely runs out, all players lose – mall security has caught them red-handed! 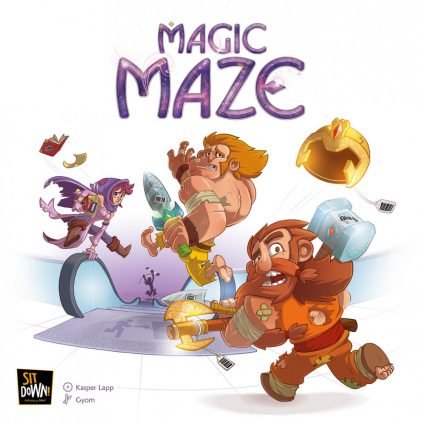 Image courtesy of Sit Down! Games via Board Game Geek

Title: Magic Maze
Players: 1-8 (There is one scenario where 9 can play.)
Type: Real Time Strategy (RTS), Cooperative, Solo
Time: 3-15 minutes play time
Designer: Kasper Lapp
Artist: Gyom
Publisher: Sit Down! Games
Release Date: February 2017
Expansions: At the time of this writing, there are no expansions, but the initial game is jam-packed with multiple scenarios, including a solo player mode. 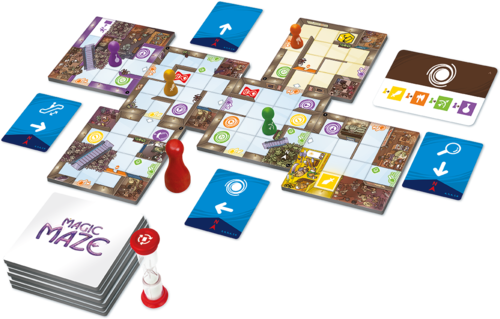 Image courtesy of Sit Down! Games via Board Game Geek

What’s in the Box?

Inside of Magic Maze are 24 mini postcard-sized tiles that make up the entire shopping mall.  Depending on the number of players and type of scenario, not all of the tiles will be required.  Some mall tiles have an “A” and “B” side, which ups the difficulty level of the scenario.

There is one starting tile where all of the heroes begin the game, and the map is built randomly from drawing tiles from a shuffled pile.  Each tile has simple, color-coded symbols that can be understood very easily and has no language dependence.

There are always 4 heroes in the game no matter the scenario or number of players.  Their movement around the board is directed by action tiles, which depict symbols of what each player can (and can’t) do over the course of the game.

Other game components include a 3-minute sand timer and a pile of little X’s (placing them indicates whether a special space has been used).  The instruction manual has at least 5 different language translations in the base game and 17 different scenarios to play. 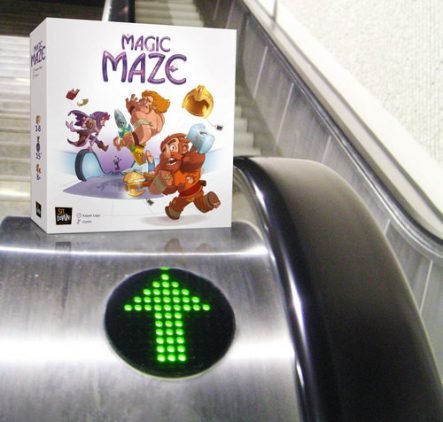 Promo image from Sit Down! Board Games

In my opinion, Magic Maze comes in a fairly bloated box that does not quite justify the amount of space needed to store the essential components.  I haven’t dug deep into where this board game is being sold, but according to Amazon it’s selling for US $35.99 + $12.99 shipping.  On Board Game Bliss, it is listed as CAD $31.95 + variable shipping costs.

That’s big price to swallow when there are similarly priced board games out in the market with collectible art or unique gaming pieces (Tokaido, Dixit, Takenoko to name a few), something of extra value to give to players.  This isn’t to say that I dislike Gyom’s signature comic art – on the contrary, I think it’s the only thing that is giving this game character and something interesting to look at.

One of my favorite art illustrations in Magic Maze is of the weapons store DIE HARD.  A surly, white-haired orc stares down customers from his cash register.  Impossibly huge, shiny bladed weapons are displayed on the walls.  Your eye follows the line of weapons until they rest on a tanning bed – which have a pair of chubby feet sticking out. 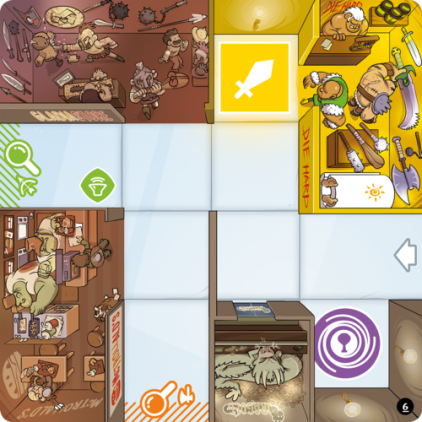 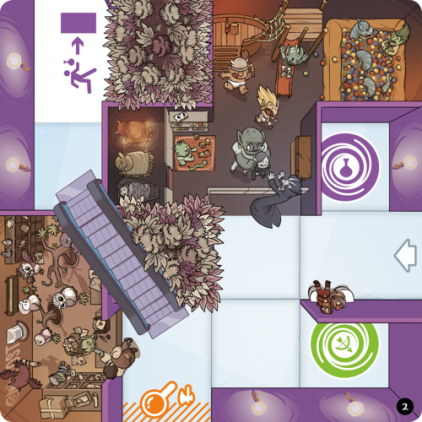 Examples of board game tiles. Images courtesy of Sit Down! Games via Board Game Geek

It’s this kind of humorous illustration that should be all over the game and its components.  Unfortunately, it’s not really something you can fully appreciate during gameplay, because things move so quickly.

There’s no doubt that Magic Maze has great replayability and versatility, but it’s hard to tell just from looking at the box.  It doesn’t help that the game’s components are so simple – you could easily print them or buy from common toy/gaming supplies.  As a matter of fact, Board Game Geek has a free print-and-play sample available on their website. 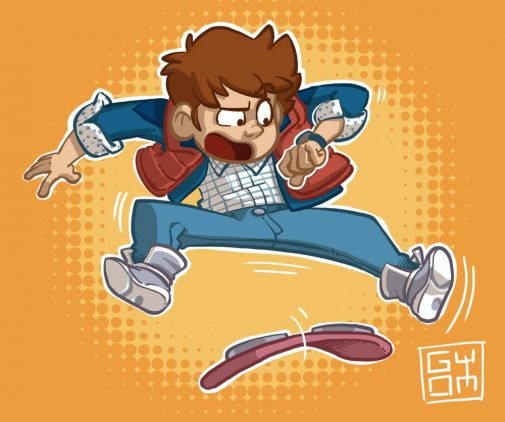 How Does It Play?

In my playthrough of Magic Maze, I played in a group of 3 people.  We played the 2 different scenarios, “Discovery” and “Pass the Tile.”

The game begins with the center mall tile where all of the heroes start.  Before the game begins, players are allowed to talk and strategize.  Once the hourglass is flipped, most forms of communication (including talking, pointing, or gesturing) are restricted.  In our game, we relaxed this rule slightly in order to get used to the mechanics. 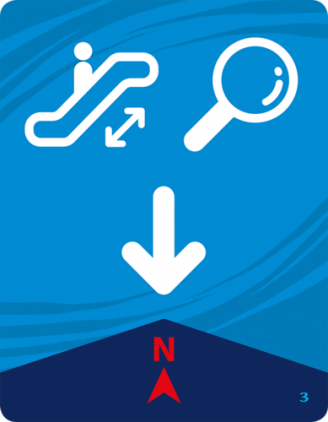 Action tile example. Image courtesy of Sit Down! Games via Board Game Geek

This was the breakdown of our actions for the game:

During the game, players can perform the action(s) depicted on their own action tile at any time and as often as they wish.  There are no “turns” because everyone plays simultaneously.  The rules encourage players to act whenever your actions may be useful, as long as they don’t disrupt another player’s movement.

One key thing to remember is if one player completes a regrettable action but did not break the rules of the game (i.e. moving a hero pawn too far in one direction), only the player(s) with the appropriate action(s) can fix that error.

Time cannot be made up for mistakes, so players are definitely encouraged to fix them quickly!

If a player can’t perform the action (because someone else has that specific action tile), the player must use the “Pay Attention!” token.  It’s a large red token roughly the size of a chess bishop and it feels immensely satisfying to bang it on top of the table. 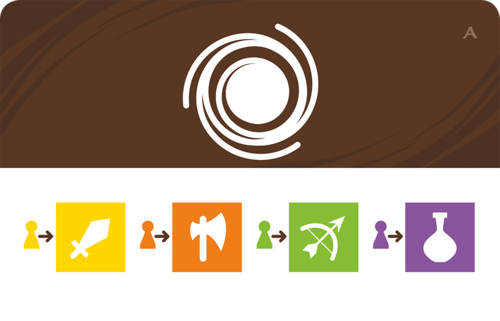 Vortex tile. Image courtesy of Sit Down! Games via Board Game Geek

What was really effective tactic for our games was concentrating on one hero pawn at a time.  As a group, we could see in an instant when to move the pawn, thus keeping the hero on track to the goal.  Even if a hero pawn was in the wrong color section, those actions were easier to correct using this single-minded tactic.

Notably, this is also where the graphic design of the game really shines through.  Each symbol for Vortex, Hourglass, Explore, as well as the individual Hero symbols were easy to identify.  You could play this game in black-and-white and it could still be an effective game.

The color choices augmented the different symbols, helping us players make simple, quick choices on how to move our hero pawns.

It was also fairly easy to lose track of time, so I made it my responsibility to keep an eye on the hourglass timer.  It was tempting at times to push the time and perform a couple more actions…but I knew better! 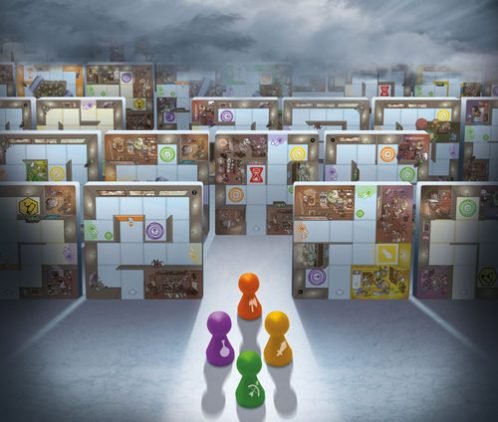 A brave band of heroes venture into the belly of the beast…THE MALL. Image courtesy of Sit Down! Games via Board Game Geek

How was the Experience?

Related:  Fire Emblem Three Houses Is Officially The Best-Selling Game In The Series

Playing Magic Maze felt like a fun, color-coded maze that sometimes showed you exactly what needed…or sometimes tricked your brain into seeing things!  There was one deliciously confusing moment when we rotated action tiles (per “Pay the Tile” scenario), our brains slowly adjusting to a new set of restrictions.

Although we sometimes made mistakes, I felt that our group knew what to do when it came down to the wire.  Our momentum slowed at times, but we were always “on” and searching the board for our next moves.

I did not take my eyes away from the game for one second, which can be an intense experience for some.  In contrast to some of my other board gaming experiences, however, I felt very rewarded for playing this particular game. 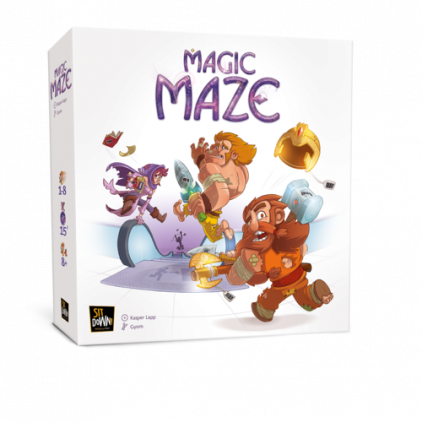 Images courtesy of Sit Down! Games via Board Game Geek

I loved the mental challenges that Magic Maze had to offer, and would gladly welcome playing other scenarios or with larger groups.  (If I do play this game with a larger group in the future, I will update this review!)

Some scenarios use the “B” side of mall tiles, which depict more complex mazes.  Others test gameplay concepts like tile rearrangement in the middle of gameplay or taking away the “Pay Attention!” pawn entirely.  There are 17 total scenarios in Magic Maze, which should keep those who are lucky to get their hands on this game entertained for a long time.

Magic Maze is a small, simple game with big gameplay!

Although I might complain about the game being too expensive on Amazon, Magic Maze boasts plenty of versatility and replayability.  Based on its quick gameplay and easy-to-understand rules, it’s shake-up to traditional board games that emphasize turn-based play.

The emphasis on nonverbal communication and sense of immersion created by the players’ cooperation are interesting, team-building exercises.  This definitely a game that won’t lag in momentum and energy, not even for a second.

I would be very interested to see what first-time board game designer Kasper Lapp has to offer in the future.  If I had to make a comparison, the style of Magic Maze is very reminiscent of several games from James Earnest’s Cheapass Games.  Lapp has a long way to go before he gets on the same level as Earnest, but Magic Maze is a very strong first entry into his board game design career.