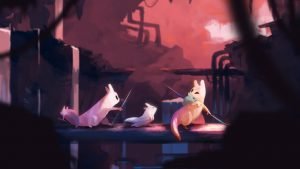 I was first intrigued by Rain World when I heard Adult Swim was publishing it, who have recently made a name for themselves as an indie game publisher. I began following it after screenshots and GIFs were released, revealing gorgeous 16-bit environments in an original sci-fi setting. Rain World is described as a survival platformer, and it is the first game from indie studio Videocult. Aside from being visually stunning, Rain World is fun, challenging, and engaging. 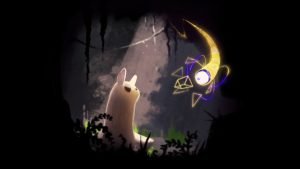 In Rain World, you play as a slugcat, an adorable alien creature making its way through industrial wastelands. During the opening cinematic, you are separated from your slugcat family during a heavy rain storm. This sets up the object of the game: the journey back to them. However, the task is made difficult by predators of the slugcat and impending storms.

Players are first introduced to the game’s mechanics with the help of a holographic insect-like creature that follows your slugcat for the beginning of the game. Jump, pick up objects, throw, and eat enough plants and small animals to hibernate. The slugcat hibernates in designated safe spots to protect itself from storms, which usually appear as tiny rooms on the map. These locations also function as save points. Successfully navigating foreign terrains and making it back to a safe spot benefits the player by unlocking new locations. On the other hand, being killed too many times will have negative effects.

Its mechanics are simple enough, but Rain World is far from easy. Once I learned the behavior of one predator, another was introduced with its own tactics, and my slugcat was quickly killed and relocated back to my last save. This was one of the more frustrating aspects of the game, and it caused me to lose great progress on the map when I wasn’t careful. Predators can be killed with spears and other objects found on the ground, but this is difficult and requires much trial and error. I found avoiding predators altogether to be the far less risky approach. Evasion is made possible by climbing beams, crawling through tunnels, or jumping strategically over the predators. 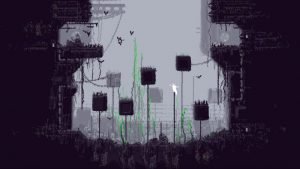 My biggest gripe with the mechanics was jumping and crawling into tunnels. There are tunnels which light up, indicating it leads to another room. Other tunnels are actually just crevices the slugcat fits inside. It was mildly frustrating when I was trying to climb inside a tunnel and instead got stuck inside a crevice. The task was made more stressful when trying to escape a predator, as many have the ability to reach inside these crevices and eat the slugcat.

It is best to take one’s time exploring Rain World. Overly ambitious players may be tempted to reveal as much of the map as possible in order to progress. I learned quickly that the map is incredibly large, almost overwhelmingly so. Videocult cites over 1,600 distinct rooms to explore in the game. The best approach is to observe predator behavior, collect enough food to hibernate and have a surplus whenever possible, and return to save points in order to move to the next “cycle”, or day. The more days spent avoiding death, the better.

Videocult crafts a world that is equal parts delightful and dreary.

Once again, the beauty of this game cannot be overstated. Each of the 1,600+ rooms are distinct from one another, complete with secret tunnels and lurking creatures. I was interested in exploring new rooms and their secrets, and never felt they were dull or repetitive. Regions are diverse, complete with their own creatures, vegetation, and atmosphere. Additionally, the movements look and feel fluid. The body of the slugcat drapes over platforms and sticks to vertical surfaces before sliding down them. Other creatures move in their own way, which makes observing their speed and approach important.

Along with graphics, Videocult does an excellent job with ambient industrial noise and an original score that complements its futuristic and foreign setting well. Rain World is best played with a nice set of headphones because of this. While players may access a meter that roughly indicates when the next storm will occur, paying attention to environmental noise – from falling raindrops to thunder – will also reveal the storm’s arrival.

I was ready to enjoy Rain World. Early screenshots, trailers, and gameplay made it clear that Videocult had something special on their hands. I was not prepared, however, for how clever this game is. Rain World kept me guessing, and I found myself having moments of realization throughout for gameplay elements and features that were not explicitly stated in the introductory tutorial. Rain World is an impressive feat not just for a studio’s first game, but as a game in general. After this, I am looking forward to what Videocult does next.

This copy of Rain World was provided by the developer for review purposes. Click here for more information on our Review Guidelines and Scoring System.

Among this year’s many exciting triple-A games, Rain World holds its own for being original, exciting, and addictive. This beautifully animated indie title keeps players on their toes by facing them with threatening creatures, each with varied tactics, and imminent storms. Mechanics can be mildly frustrating at times, but there is certainly a learning curve. All in all, Rain World is delightfully weird and should not be overlooked.