I’ve played quite a few iOS games over the years, almost always out of boredom. None of these games are particularly fulfilling (or even good, really), but I blame the shallow platform, not the developers. Some games that I’ve managed to have a bit of fun with, however, are games that have a retro feel and make good use of pixel art, like Tiny Towers. The Tiny games look great, have a quasi-novel concept, and can be pretty addicting. Ultimately, though, they lose me pretty quick because there’s just not enough there. Halcyon 6: Starbase Commander takes everything I love about those games—the art, the comedy, the procedural play— and brings it to PC in an attempt to give you more room to play around in. 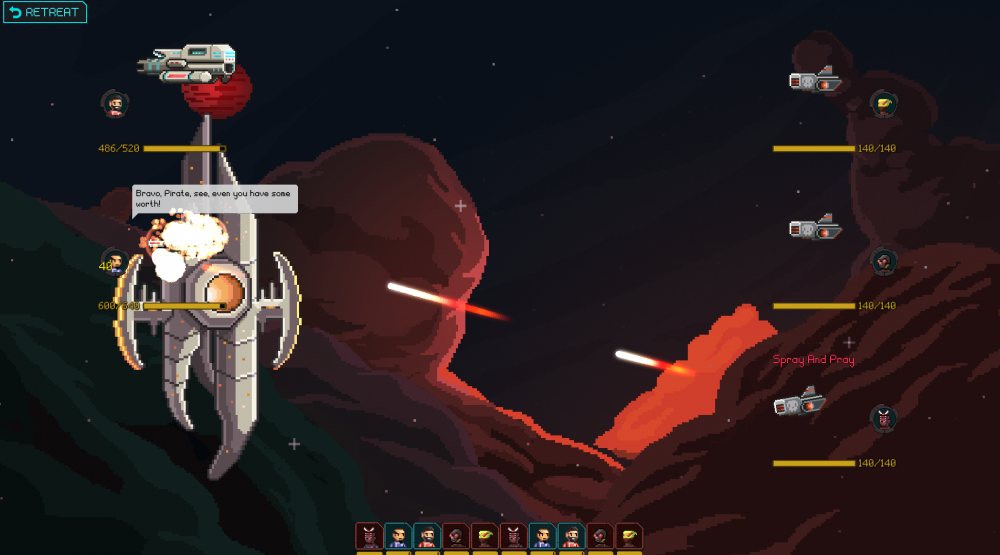 Halcyon 6: Starbase Commander kind of throws you in as soon as you boot it up, and while it can be a little jarring to have to go straight into turn-based pixelated space-combat, the game situates you pretty quickly after. It’s all necessary for the plot, though, because you’re supposed be confused at first—shit is going down and that’s the precursor to the story of the game. You see, you are in control of the last remaining human starbase in the galaxy, and are in charge of navigating and negotiating your way through space while simultaneously collecting resources to stay alive and dodging hostile enemies.

The gameplay is pretty evenly broken up between “exploration,” (which is mostly just collecting resources), building and upgrading new rooms in you starbase, and fighting. There is lots and lots of fighting. I actually really enjoyed all of the space-battling, because it is very much like a turn-based JRPG in that way, splitting up turns between your human ships that you’ve sent out from your starbase and the various species of aliens and space pirates you’ll encounter while roaming the galaxy.

One critique I will give about combat in space is that it is relatively easy, and I never experienced much of a spike in difficulty, nor did I ever die. I came close to losing a ship from one of my fleets a couple times, but for the most part, eliminating the alien enemies never posed too much trouble. I will say that, aside from the relative ease, space combat was pretty fun. The more you level up the officers in your fleets, the more abilities they get and the more powerful they become. Also, if you pay attention to your ships, you can see some pretty funny dialogue popping up over their heads during battle.

Actually, almost every aspect of Halcyon 6: Starbase Commander offers some smart comedy. It’s one of those games that manages to poke fun at itself and the genre it belongs to while simultaneously being a great entry. It’s self-aware in all of the right ways, and you can expect a lot of jokes about the sci-fi genre. Some of the best and funniest moments come from exploring the Halcyon 6 starbase itself. Rebuilding the starbase is a pretty large part of this game, but before you can build a room, you must first explore that room, because apparently most of the base has been left to dilapidate, and you must uncover some of its secrets before you can spruce it up. This means that you’ll select an empty room on the base, and send an officer to explore it. After a few space-days (which you can fast-forward through, thank god), you’ll be prompted to go inspect what the officers uncovered. Almost always this leads to an on-foot battle sequence with some odd space-creature infesting your ship, and you’ll need to take care of it before you can build something cool.

The on-foot combat in Halcyon 6: Starbase Commander is identical to space-combat in that it is turn-based and relies on the abilities your officers have collected by leveling up. I found that exploring the base was one of my favorite aspects to the game, because narrative is one of my main draws to any game, and the base exploration scenarios act as little vignettes adding to the main stories. I once found a room with a floating and (seemingly) malfunction Borgoth (some purple bio-mechanical creature). Upon discovering it, I had two choices: attack or ignore. Since I found it not to be hostile, I ignored i. The Borgoth then initiated a distress signal and called other Borgoths to the area. The game then told me that this section of the ship was now under Borgoth control, and that I would actually have to “take care of them” before any construction could occur in that wing of the ship. It was great!

Also check out:   There won't be a Forza Horizon 5 demo according to Playground Games 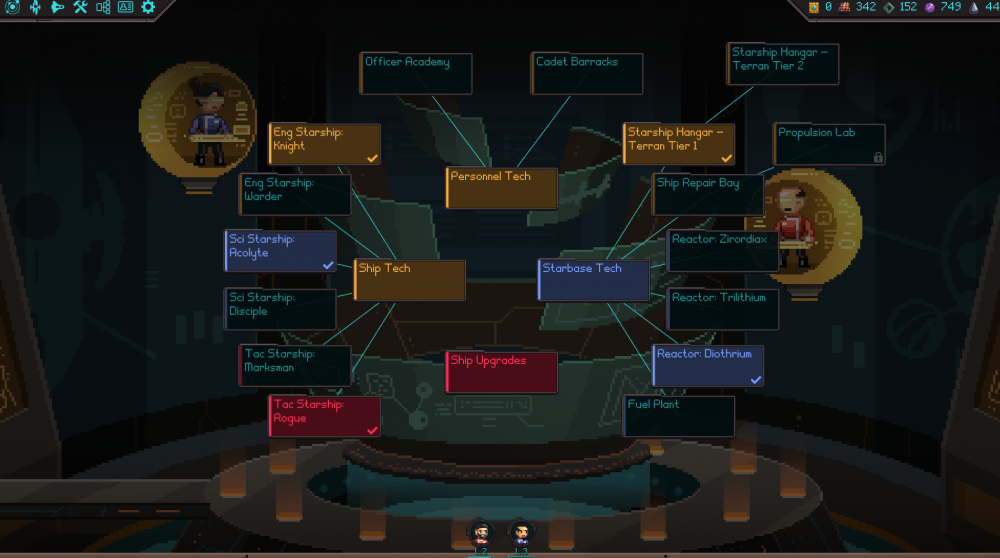 Exploring and rebuilding the Halcyon 6 starbase, while fairly easy to do, cannot be accomplished without resources. In order to gain more resources, you’ll ned to assemble your fleet of officers and venture out into space to recover these resources from various refineries and mineral bases throughout the galaxy. This is arguably the most mundane and least flashy part of the game, resulting in a pretty stale map with tiny markers all around that definitely do not look as good as the game is capable of showing, like in battle or on the starship. One of the reasons it is so mundane is that the task of collecting resources itself is ultimately just a simple matter of clicking and waiting while the tiny fleet ships make their way around the map.

One way the developers have chosen to spice up this portion of the game is with side-quest-type missions that require you to collect certain resources or rebuild various space stations that have been damaged or are under attack by some hostile alien species. For completing these missions, you’re usually rewarded with some more resources that then stockpile on board your ship until you drop them off at Halcyon 6. This was definitely my least favorite part of the game, because while I understand that you need resources in order to build bigger and better rooms on your starbase, it never really felt fun to go out and collect them, but always seemed to be more of a chore.

One final aspect of the game to discuss, and one that I really liked, was interaction with the various species or races that are out in space, all vying for control of this or that sector. Every once in awhile, you’re gameplay will be interrupted with a video message sent to your bridge, and you’ll have the chance to chat with a representative or leader from one of these groups. Sometimes they are simply out to give you some advice and ask for your assistance getting rid of some nearby space-pirates, and other times they are downright hostile, warning you against approaching their territory or outright looking for war. During these conversations you are prompted to choose your responses, and you can also choose who you want to side with, or try your hand at wiping them all out. I really liked this bit of role-playing that was thrown in, but it’s definitely not on par with something like a AAA title’s brand of dialogue choices, only offering you two responses any time you’re prompted, which usually only allowed you to choose from being kind or rude. Some more roleplaying would have been nice. 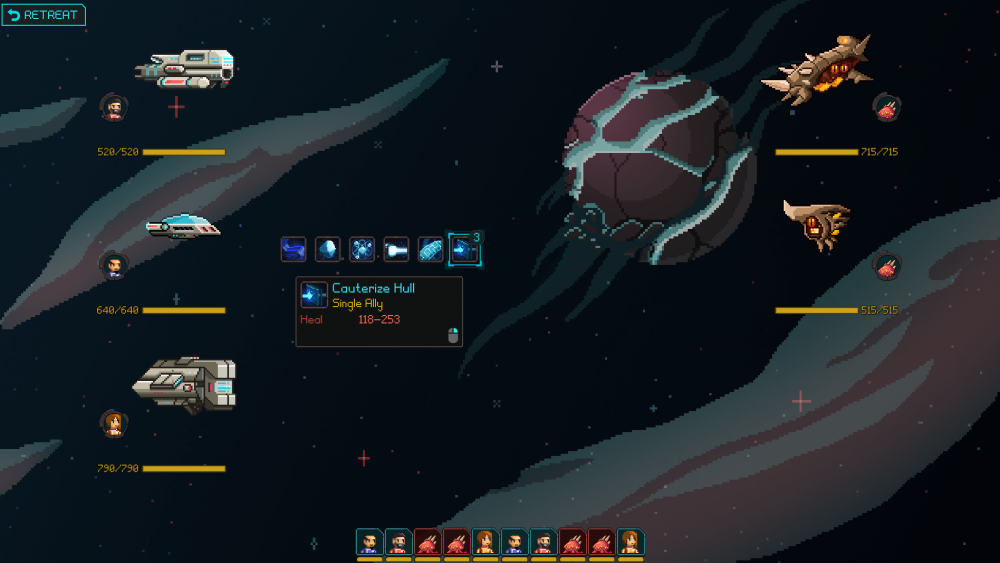 All in all, this is a pretty fun game, and it offers a lot of charm and humor to make it worth a go. I do, however, have some complaints. I mentioned earlier that this game reminds me a lot of many iOS games that offer a very novel idea but are packaged as such that they only offer so much depth and little reward for playing. I understand that, because that’s the nature of the platform. Halcyon 6: Starbase Commander does manage to embody the good things about those games while also pushing the limits a bit further than a mobile game allows, but it simply doesn’t push them far enough. I mean, those mobile games I’m mentioning are usually free, and for the price point of Halcyon 6: Starbase Commander, I expect much more than a slightly more in-depth version of an iOS game, which, at times, seems to be all we’re supposed to get.

Halcyon 6: Starbase Commander is a fun (and funny) game with great art and novel ideas. For a casual experience, it’s a game that offers a lot of enjoyment, but can get a little stale pretty quickly. It’s a large improvement on everything that’s good about the games I love on iOS, but it doesn’t manage to bridge that gap to a full-fledged PC game completely, leaving you hanging in a few areas wishing for a bit more depth.