Jitsu Wa Watashi Wa: Actually, I am… Reviewing this Anime…

I’m not going to lie; when I was searching for anime early this Summer, I started watching Jitsu Wa Watashi Wa (“Actually, I am…” in English) thinking that I was doubling down on monster girl harems. Much to my suprise, Actually I am is a rather straightforward high school romance-comedy anime with charming characters and fun situations. Interestingly enough, Actually I am doesn’t focus as much on the monster angle, choosing to let the characters act as well-adjusted people trying to live normal lives rather than taking the culture shock angle. With all that said, let’s get ourselves acquainted with Actually, I am… 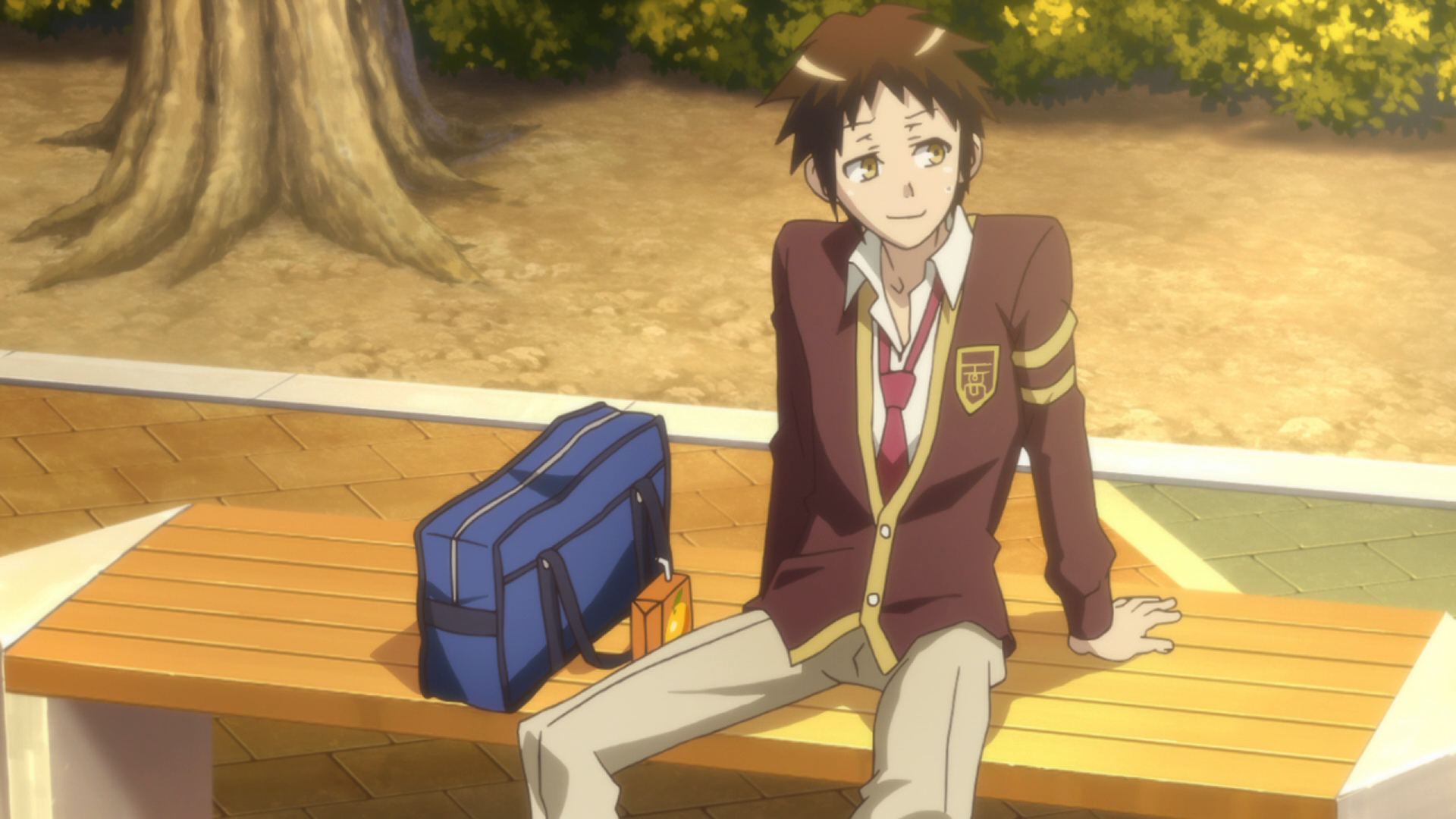 Nicknamed “the leaky basket”, Asahi is incapable of keeping anything to himself; even if he doesn’t say it outright, he has little to no control over his tells and body language. After being convinced to finally confess to his crush by his friends (yes, the protagonist actually has friends outside of the girls), he is surprised to find out that she’s actually a vampire, which catches him so off guard that he asks to be her friend rather than asking her out. Now, he struggles to keep her vampirism a secret so that she can keep going to school with him.
He isn’t a pervert, and he’s not some everyman for the viewer to self-insert with; rather, he’s a well-defined awkward but kind young man biding his time until he can properly confess to his lady love. It’s notable that though three girls are interested in him, he only has eyes for one of them. 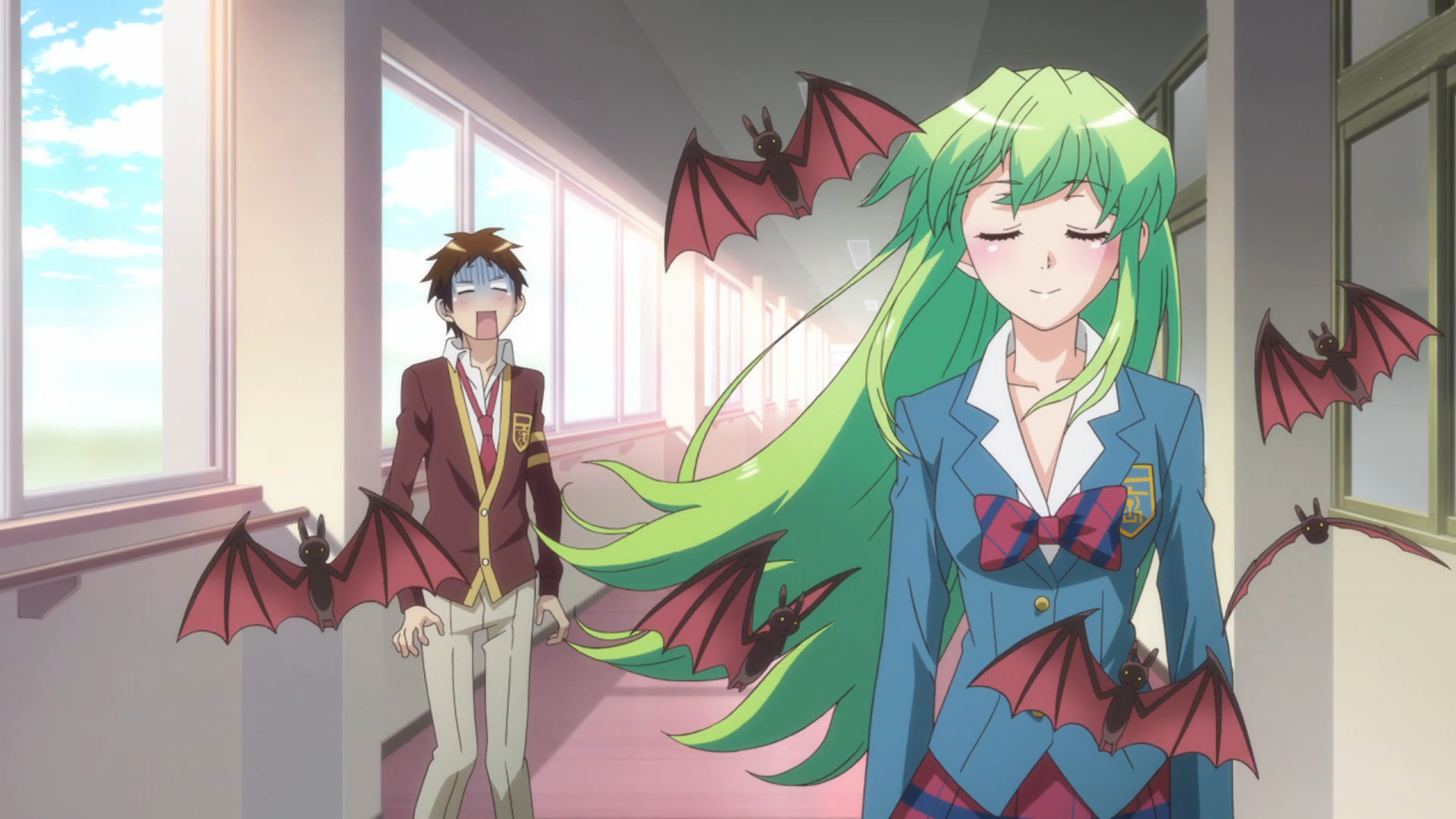 Before being discovered by Asahi, Yoko Shiragami was held back severely by being a vampire; waiting until after school to eat lunch alone, not participating in activities to stay out of sunlight, and having a generally miserable time in the name of protecting her secret. However, Yoko really began to come out of her shell after Asahi discovered she was a vampire and convinced her to stay in school so long as he could keep her secret; becoming fast friends with him and figuring out new ways to live a normal life. Yoko is also terribly dense, being unable to recognize that Asahi has feelings for her and constantly trying to set him up with their class rep.
It’s notable that for the sake of this anime as a whole, none of the established vampire weaknesses actually work: Sunlight just makes them tan extremely quickly and can be circumvented with sunscreen, crosses only make them irrationally angry, ETC. Also, drinking blood is a show of intimacy, which is neither here nor there, but there we have it. 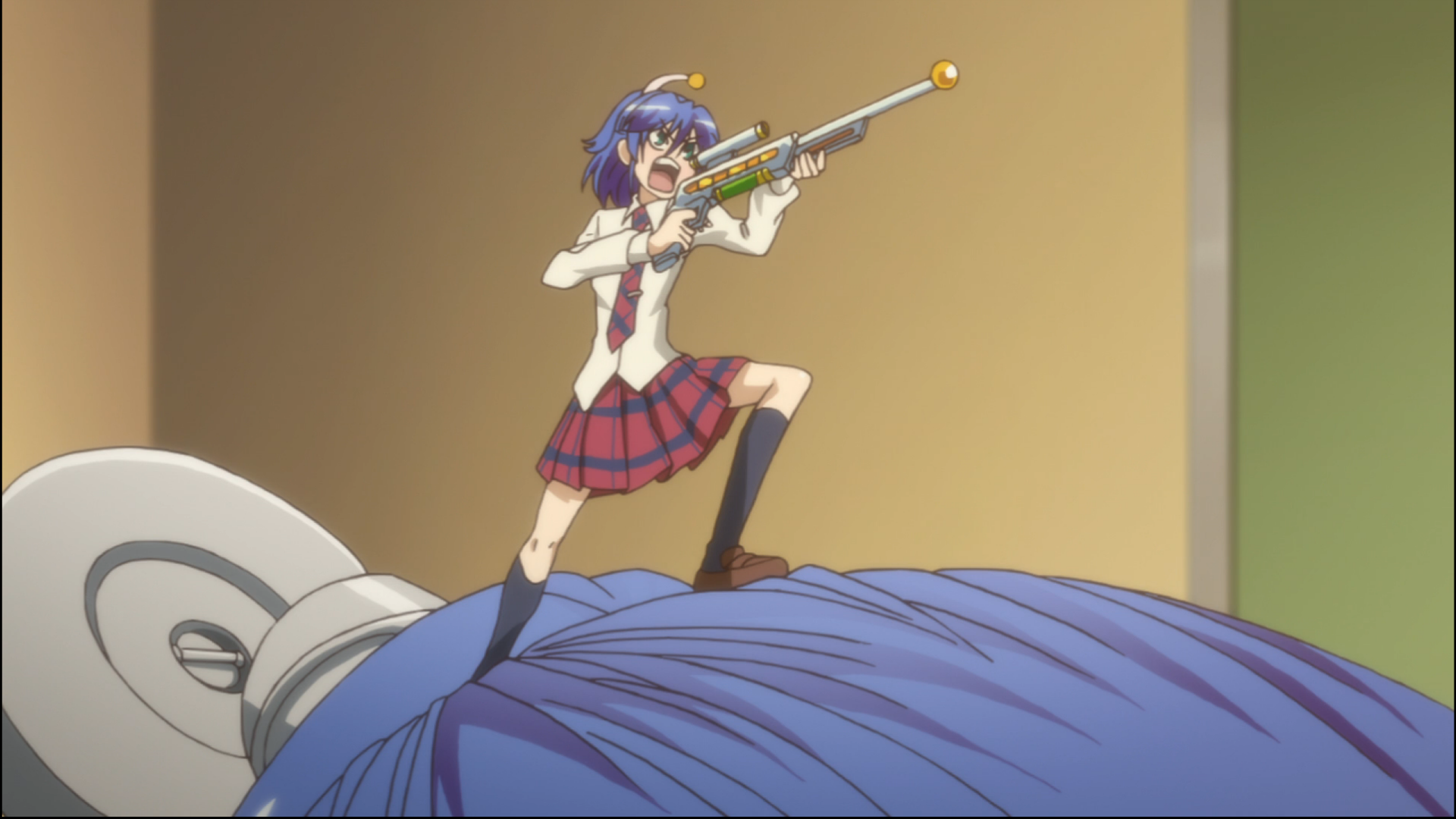 Asahi and Yoko’s class rep, Nagisa is an alien soldier in deep cover acting as a high school student. Though she does find out that Yoko is a vampire; she originally believed her to be an alien, and as such revealed herself, so they have a made mutual agreement with Asahi for their secrets to be kept. And though she constantly reminds everyone that she is a battle-ready, highly-trained warrior; Nagisa acts as a draconian class rep, taking the rules as seriously as if she were a drill sergeant despite the relatively unimportant nature of proper high school behavior. This tough exterior caused her to turn down Asahi when he confessed to her a year prior, but after befriending him, she has begun to develop romantic feelings.
Nagisa’s race is actually quite small in size, needing an external mech-like unit to blend in. However, though this is explored to great comedic effect in one episode, everything just moves forward without having her small size being used in any meaningful way. It’s not a huge deal, but I would have liked to see her admitting to herself that her natural size would be an issue as far as romance goes. 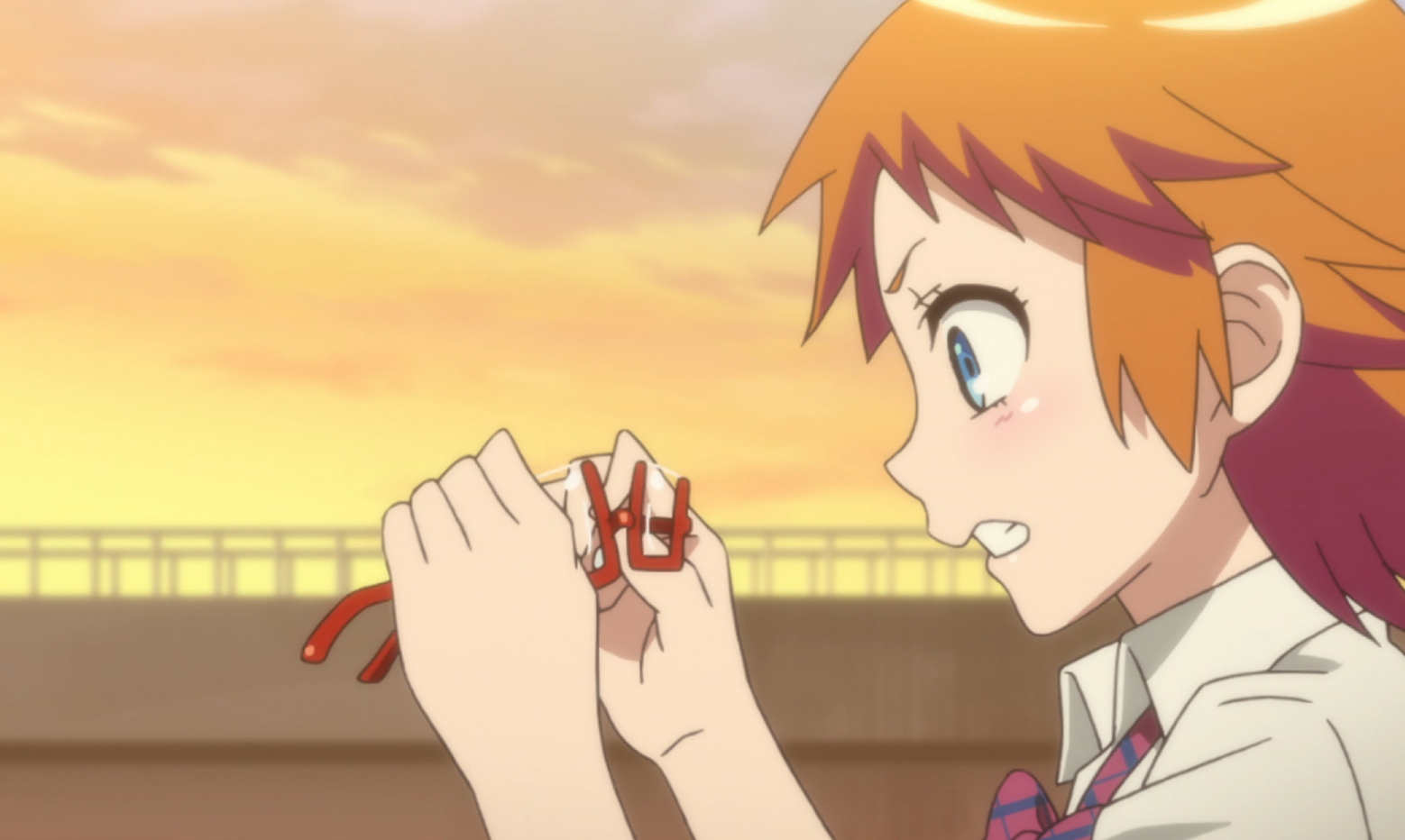 Unlike the others, Mikan is actually not a monster girl. Rather, her glasses are possessed by a fukunokami, a god of luck. Unfortunately, this really only serves as a plotline rather than offering any overly interesting character. On a basic level, those glasses are what gives Mikan the confidence to be a ruthless school reporter, but not because of the fukunokami. Rather, those glasses are precious to her because they were given to her by Asahi when he won them as a prize at a festival; this is meant to show that she has intense feelings for him as according to the fukunokami itself, it can only bind itself to objects of extreme sentimental value. Though she is in love with Asahi and has been since childhood, she never acts on it, but rather sits on the sidelines and acknowledges that he only wants to be with Yoko. 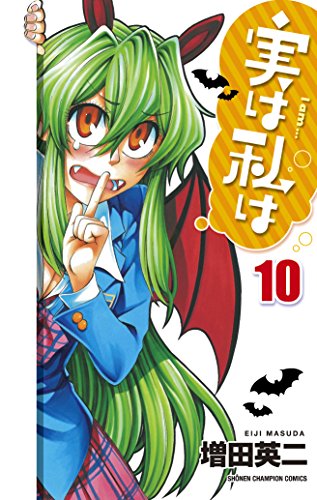 I can see why they opted for a more neutral style

Actually I am was the object of a small amount of controversy when it first came out. As it would seem, the original manga had a very distinctly exaggerated art style, but the anime is rather standard in its style with the exception of moments of extreme emotion. With that said, unless you’re a purist, this artistic choice works in the anime’s favor, giving a great deal of charm to the characters and their mannerisms. Otherwise, the OP and ED are pretty good (though they clash a bit with one being a more like what you’d expect from this kind of anime and the other being a weird rap), and the atmospheric music is serviceable enough. 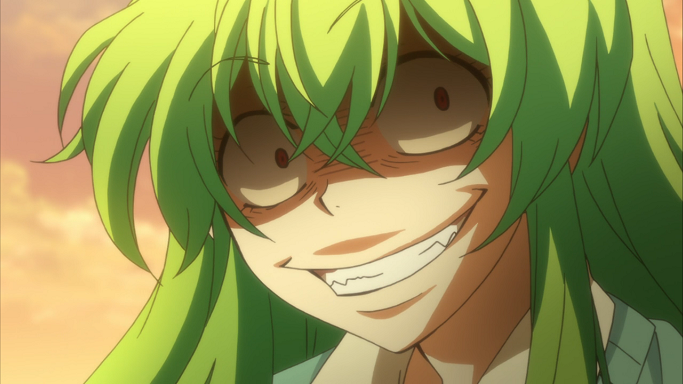 for the most part , at least

Overall, Actually I Am does a good job of defining its characters and situations. The pacing is strong in alternating between comedic and heartfelt moments, all of which is entertaining and easy to follow. In this way, it’s apparent that Actually I Am works hard to create its own identity and style; with bizarre comedy and honest emotion from the characters and usually gets the most it can out of them. Though this strategy generally works in their favor, there is a character (that for spoiler-related reasons I did not mention in this review) who has a rather interesting and exploitable secret; however, once this secret is revealed, it is never further explored for comedic effect or even mentioned in any way after the episode in which they are introduced. This line of action is what has me most split on this anime: is the value of letting the story and characters act in an organic manner greater than the value of allowing the special traits of the characters to shine?

I don’t know what it is with me and rom/com anime. I always get so invested in the characters and their escapades that any ending ends up being bittersweet: if the main characters get together, I get sad that the chase is over; though I typically am up happy for them. If they don’t get together at the end (due to the story not reaching the point where the confession would occur) I am left desperately wanting, though I am happy that there will be more to look forward to in the future (hopefully). If the series should conclude and they don’t get together due to rejection of any sort, I feel like I’ve lost as much as the main character. This anime is no different, with strong characters and equally strong chemistry between them.

With that said, Actually I am is a great ride, even if it’s criminally short. Definitely worth the watch if you’re into cutesy romantic comedy.